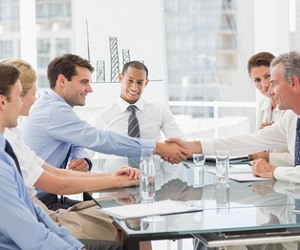 Written for EO by Peter Kozodoy, partner and chief strategy officer at Gem Advertising and an EO New York member.

As an entrepreneur for more than a decade, I’ve learned a thing or two about sales. Namely: Sales isn’t linear, easy, intuitive or even simple.

Rather, sales is a nuanced beast that requires complete alignment among the product, positioning, pricing, marketing, character and personality of the salesperson, timing, and a whole lot of that wonderful business strategy I like to call “luck.”

Even so, I’ve emerged with a few rules that make it much easier for me to launch new businesses and grow sales more predictably (and, dare I say, more easily). Many of those strategies—like offering a guarantee, perfecting your pitch and constantly revisiting your funnel—have been written about extensively before.

But there’s one unlikely but powerful lesson I’ve learned when it comes to growing your sales that most business managers never even consider. And it’s all about the salesperson.

Traditionally, we think of salespeople as extroverts: skilled in the art of the babble and gifted with social popularity. But, Matthew Pollard, the “Rapid Growth Guy” and author of the just-released book The Introvert’s Edge, convinced me recently that introverts are far more likely to be high-performers on your sales team than their outgoing counterparts.

Why? Because introverts can’t survive on their charm and personality alone. Instead, they need a system to succeed. Pollard understands this dynamic firsthand because he used to be an introverted salesperson himself. In fact, before becoming the “Rapid Growth Guy,” he wasn’t interested in sales at all, and he was even terrified of the idea of being a salesperson until he was forced into a commission-only sales job (the only one he could find).

It took 93 rejections to get his first $70 sale, and he knew that he couldn’t keep facing rejection if he was going to survive his new job.

So, he sought out a system that he could essentially hide behind, so he didn’t have to rely on his social skills to carry him through each and every sale.

After watching dozens of YouTube videos on sales, he built a system that he could test and refine over time. And because he was naturally introverted, he didn’t mind looking inward to improve himself and his system.

In a few short months, he went from being terrified of cold-calling to being the number-one performer in his division to, now, teaching how to sell. The secret to his success? “While extroverts may have been outselling me day-to-day,” Pollard admits, “my sales results just continued to improve with my system.”

Extroverts who have gotten by on their personality are typically reluctant to change. After all, their disposition has worked for them in the past, so why should they?

The only problem is that extroverts will get frustrated and give up more quickly if their “proven” personality isn’t working, whereas introverts will gravitate towards a system for the long haul because they know they need help in the first place.

After seeing this dichotomy play out over and over again in different teams and industries, Pollard wrote his book with a goal of getting sales managers around the world to understand the untapped power of their introverted candidates. What Pollard found is that, given a little confidence, introverts will take your system, run with it and refine it for the benefit of your entire organization.

So the next time you’re hiring for charm, consider hiring a more introverted, system-oriented mind instead. If you want your sales to be dependent on skill instead of luck, introverts might make the best team you could ask for.