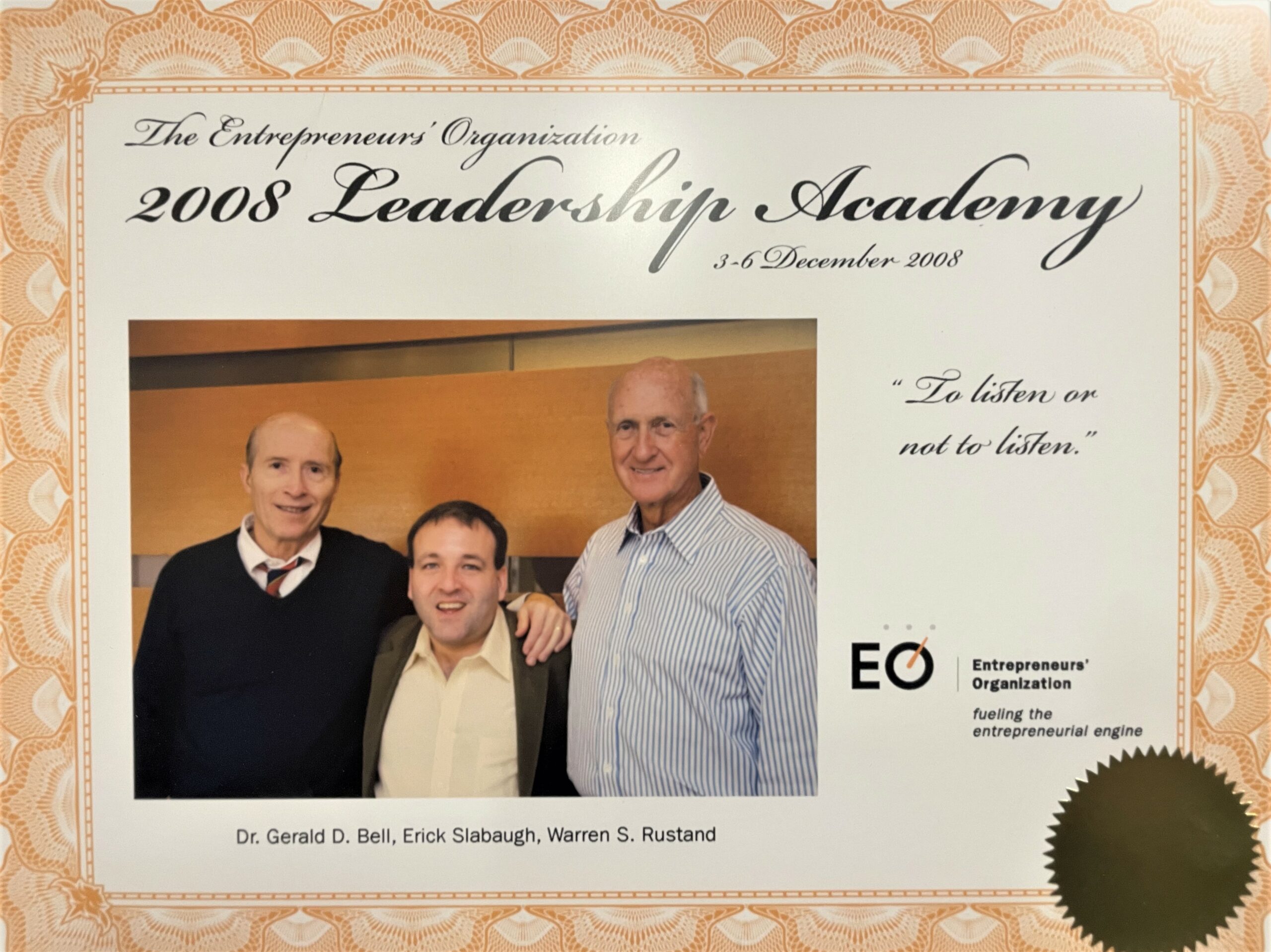 by Erick Slabaugh, a long-standing EO member in Seattle and former director on the EO Global Board

“If your actions inspire others to dream more, learn more, do more and become more, you are a leader.” — John Quincy Adams

As a member of EO for 25 years, I have had the immense privilege of partaking in countless initiatives that transformed my own experience along the way. One of the highest-impact highlights of my EO journey has been participating in the creation of the EO Global Leadership Academy (GLA).

While the role I played in launching GLA was simply acting as one brick in the wall of a beautiful cathedral of leadership, I couldn’t help but spend some time recently looking back fondly on the wonderful stories born out of the experience.

Whether you have attended EO’s Leadership Academies or still look forward to the opportunity, the foundation upon which this remarkable programme was built is notable. The programmes have since evolved—but the original spirit of leadership, character and shared growth remains fully intact. It is a spirit that has contributed to the personal development of some of the world’s finest entrepreneurs making a true impact on companies, communities, and families across the globe.

David Galbenski and I served on the EO Global Board together in 2007. David—a truly remarkable world-class leader—called me with an idea for a “project” he had: a condensed, high-impact leadership training programme for current and future EO Global Board members. The concept was to create an educational event that would provide experience and development for what it took to be a better leader of a global organization.

I loved the idea and his vision. However, I told David that when it came to my coming aboard to help build the programme, I had one condition: I wanted authorization to recruit the Dean of the faculty from outside the organization.

I said that to him with someone specific in mind.

A year earlier, as EO began fostering stronger collaborative bonds with WPO/YPO, I had attended the Public Policy Forum, a YPO event in Washington, DC. There, I became acquainted with Warren Rustand, who was leading it. I vividly remember sitting in the audience and thinking:

“This man is the most inspiring thinker and speaker on leadership that I have ever seen.”

Our goal became clear: to recruit Warren to serve as the Dean of our learning programme faculty.

I flew to Washington, DC, and sat down with Warren, then-EO Director Bob Strade, and Ben Richter (who also had a programme to pitch to Warren). Warren loved our ideas but had a condition of his own: He wanted to include Dr. Gerald Bell of the University of North Carolina’s Bell Leadership Institute in the programme.

Dr. Bell also agreed to come on board, and all together, we collectively built the programme’s strategy, structure, and content. That’s how EO’s Global Leadership Academy (GLA) was born.

For the first four years, we had Warren Rustand for the entire programme and Dr. Bell present for a full day of leadership training. It was one of the most remarkable rooms, let alone classrooms, I had ever found myself facilitating.

In the first year (2008), we had a meager budget, limited staff support, and only seven months to pull everything together. Keith Williams, EVP of Learning; Chelsea Dennison, EO Staff lead; and I had US$50,000, which was one-tenth the budget American Express was spending on a similar event. We had to develop a minimum viable product that would “wow” the organization’s top leadership and prove the initial investment worthwhile.

We went to Andrew Sherman, EO’s legal counsel, and asked if he would donate Jones Day’s Washington, DC, executive conference center for four days. I asked three tenured EO Global Board members—David Galbenski, Greg Crabtree and Jesus De La Garza—to join me at their own expense as facilitators of the breakouts we planned. They, too, were happy to support the cause.

Keith sold the vision of what could be and asked our speakers to reduce or waive fees. All of them did. Even some of the venues and caterers worked with us to produce tasteful yet affordable experiences that elevated the inaugural class’s experience.

The first year was a success.

Somewhere around the second year of the Academy, we had a feeling that this programme, impactful and transformational as it was, might have the potential to serve a bigger purpose. We thought: What if we made the programme available to other members? What if we made it available to all EO members as a true global member benefit?

Michael Caito took over in year five, and then George Gan took the reins from there, playing a pivotal role in developing the programme at the regional level. A few iterations later, it became the EO Regional Leadership Academy (RLA), accessible to every region across 60+ countries under EO’s global umbrella.

A Need for Leadership

I’ve known and deeply respected Warren Rustand for 15+ years now. Warren recognized early in his life that the world had a remarkable thirst and deep need for better leaders. In what he calls the continuous act of “humans becoming,” Warren saw the potential for more humans to become the leaders the world needed them to be.

Much of Warren’s methodology for inspired leadership comes down to knowledge and choice. Warren believes that greatness is a choice rather than an endowment. It means that all individuals, should they make the choice for personal greatness, could become remarkable leaders. Warren’s most recent book, The Leader Within Us, echoes that belief: “We must choose greatness. People don’t hand us greatness. We decide to be great and then discipline ourselves to be great. It’s about choice and discipline.”

I agreed with Warren at the time, but I hadn’t realized the extent to which he was right. It seemed that as the years went on, nearly everywhere I turned, I was exposed to poor leadership at both macro and micro levels. From the rise of situational ethics to “scotoma” (blind spots) that so many leaders seemed to have, I felt our generation of leadership needed a transformative education.

GLA strived to prepare our membership to help them exist as the strongest exemplars of leadership they could possibly be. The ripple effects of GLA’s original vision for leadership development extended far beyond the boardroom: members learned how to be high-caliber leaders within their families, communities, and sociological environments at large.

Warren Rustand’s version of leadership has always extended wholly into the civic realm. While GLA never encouraged political action of any kind, Warren and I shared a fundamental understanding: As people, we live in a town or city, within a larger state or province, within a larger country, within a larger world. The choice was ours. Either we could choose to be part of the leadership at any of those levels, or we could choose to sit idly by and watch those levels get worse before our very eyes. Whatever “level” of leadership engagement speaks to you, the goal was to serve the totality of an entrepreneur. Upon doing so, leaders are equipped and empowered to choose to engage where we’re most inspired to do so.

Accordingly, early GLA training sessions created opportunities for new knowledge acquisition and encouraged individuals to make the choice for personal greatness beyond one’s traditional boundaries. Warren’s version of knowledge, greatness and discipline took many forms—including one which many EO members might not know about: etiquette training.

Shelby Scarbrough and I worked together to recruit a key partner, and good friend of Shelby’s, from the Smithsonian Museum. We arranged a mock State Dinner as part of the early-day GLA experience. It was first held at the Daughters of the American Revolution Banquet Hall, an absolutely incredible setting that was a mockup of the White House Dining Hall.

The intent was to empower leaders with traditional etiquette training. We learned about using the right forks for the right portions of a formal dinner; how to give a proper toast; the origins of the handshake and how to conduct an effective one; how to leverage mnemonics to deliver an effective speech; and more.  I will never forget George Gan’s toast to EO, which started out, “A score and some years ago….” It was absolutely moving and brilliant.

Some of those things have since gone away. Many of us have access to resources, coaching and training on etiquette elements outside of the Leadership Academies.

Yet, having the opportunity to break down and challenge our ego, build character, be totally raw and exposed, and build back up again is not something we can do in our regular contexts and environments. It was a unique leadership skillset and mindset that couldn’t be acquired anywhere else—and it slowly became a major focus for GLA and RLA experiences.

Adversity exposes character. It is exceptionally easy to be compassionate, loving and kind when all is going great. When all isn’t going great, our character takes the reins on every decision, action, and reaction. Character matters, and GLA continues to focus its curriculum on building character-driven leadership, which is achieved once the ego gets out of our way.

While EO’s Global Leadership Academy has evolved, the original spirit is entirely present–and it is a spirit of Warren Rustand himself, whose fingerprints remain deeply embedded in the Academy as it stands today.

And they have evolved, which is a wonderful thing. There are remarkable leaders across the globe who have done a phenomenal job growing the programme and cementing its future. The future is bright—but the past, and the original spirit of GLA, are worth recognizing, celebrating and maintaining.

Dave Galbenksi does not receive enough credit for it, but it will unquestionably go down as one of the great ideas of his lifetime. I am thankful for Bob Strade, who empowered us to execute on it. I am forever indebted to Warren Rustand—not only for giving me a “yes” when he agreed to come on board, but also for taking GLA well beyond where it was and for staying committed to building a legacy for EO members everywhere. He has instrumentally helped us fulfill a vision far exceeding what I ever thought we would do.

Today, I remain incredibly excited to see the next generation of vision that will take GLA, RLA and EO leaders to new heights. In the act of “humans becoming,” I hope that we all make the choice to become better leaders. The world needs us.

Contributed to EO by Erick Slabaugh, a long-standing member leader of EO Seattle and former director on the EO Global Board, who is a serial entrepreneur, board member and advisor. He serves as the CEO of Absco Solutions, a 40+ year market veteran in the facility security and fire-life safety industry, as well as CEO of FCP Insight, a cloud-based enterprise software solution for electrical contracting businesses. Erick recently shared 5 Timeless Principles of Entrepreneurial Success on EO’s Inc.com channel.