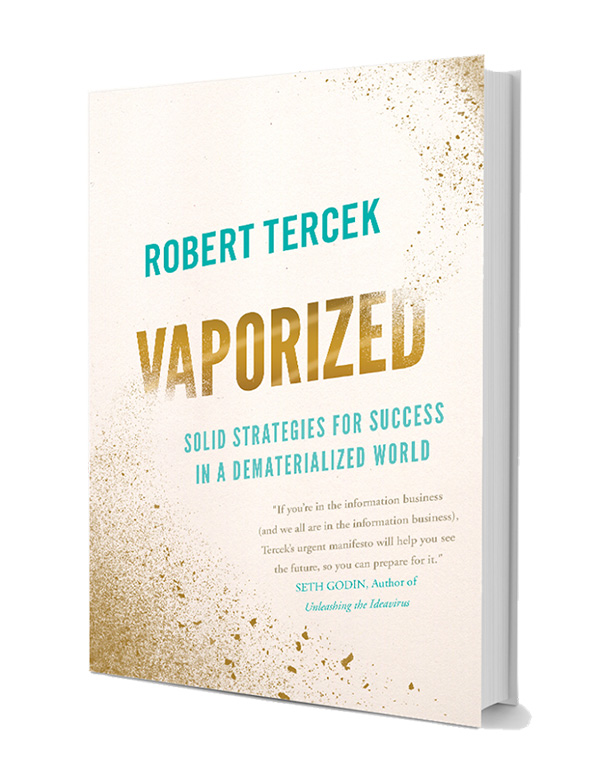 Robert Tercek is a digital business guru, author and previous executive at MTV, Sony Picture and The Oprah Winfrey Network (OWN); and his new book, Vaporized: Solid Strategies for Success in a Dematerialized World, is sending a resounding message to all business owners and consumers: Digital technology is overtaking traditional business models – adapt, or be forced into obsolescence.

However, the proposition doesn’t have to be business’ death sentence; rather, Tercek argues this transition has the opportunity to revolutionize your company and save you from “demand destruction.” We spoke with the author and his predictions for the future of business. Here’s what he had to say:

In your book, you discuss “demand destruction.” Could you define that concept and tell us how this can benefit entrepreneurs?

Demand destruction occurs when there’s a new substitute that’s so comprehensive and good that a previous product or service becomes obsolete. You might think of horseshoes after the motor vehicle came along. That process was pretty rare in the past, but now, demand destruction occurs routinely. It’s actually a business strategy, as companies evaluate what we can replace with pure information: a software service becomes a substitute for a physical product. As crazy as that idea sounds, it’s the heart of my book – replacing physical things with software.

That’s a very difficult proposition for traditional companies, to pivot toward replacing physical products with software. But for entrepreneurs, particularly for people who come from those industries that see the opportunity to use software to replace an object, that’s a great opportunity. It’s almost guaranteed as a fundable business concept because you can point to demand destruction of a traditional product.

For someone who isn’t a digital native, this concept could be frightening. Could you explain how to make a game-plan for this kind of transformation within a company?

My belief is that every company will be a software company. Because this process is inexorable and it will go through every company, I think every organization needs to refocus around software at the core of their business. If you don’t, you’re choosing not to participate in the fastest-growing segment of the economy, and your industry won’t grow in the future.

An example: the car industry isn’t going to grow. We’re not going to sell more cars in the future. We’re going to find more ways to utilize the cars we have. It’s a software problem – and it’s one Uber, Sidecar, Lyft and other vehicle-sharing companies are trying to solve, and they have incredibly high valuation. This is a big paradox: If you can find a way to substitute software for a physical thing like a car, that’s not a small business opportunity; it’s an enormous opportunity.

What is the biggest cost difference between physical and digitally-based companies?

Internet-based companies are hugely profitable and operate at planetary scale. They can do that because they don’t have any physical infrastructure; it’s all digital, so you can distribute worldwide. And it’ll continue to grow. This is a key point. Whatever size the internet is today, it’s going to be double that size in a couple of years, by virtue of the fact that 500 million more people are coming every year because of smart phones. You can’t name another industry that grows like that. So I believe software will become increasingly more important to companies and a bigger part of their profitability.

What about people who enjoy the tactility of physical products versus digital software?

That’s a great question – you might ask, “Why did you publish a hardbound book, when you’re writing about vaporizing things?” We’re human beings; human beings like tactile sensations, and we like to know we got the thing that we paid for. The thing is, what we each like is a little bit different, so we’re going to be selective about what we buy in physical form. You’re going to find that a digital version is cheaper, easier to access, more convenient, more designed for your lifestyle and fits into your workflow better. You’re going to have to make a tough call about which physical products you choose to own. And fewer people will buy them, so they will be more expensive. So, it will be a world of widely cheap and digital services, and then some scarce and expensive, but really great quality, tactile experiences.

How can small and/or local businesses with tactile products best respond?

I’ll give an example of a butcher shop in my neighborhood. Everything they have, they make fresh that day; and when they sell out, they close the store. What they have is the best meat and fish selection in southern California, so people drive from all over to come to this particular shop.

What they’re doing is optimizing for excellence. You can buy cheap substitutes all over town, so they opted for high quality. They have to be more excellent than the internet. How does a company do that? First of all, service has to be top-notch. Second, it has to be the highest quality you can possibly deliver. Third, it has to be timely in some fashion; it has to be relevant. A company can’t have a product from three months ago on the shelf; they’re not going to compete.

What other predictions, beyond software and applications, do you have for our “Information Age”?

A timely topic is labor and robotics. Throughout the industrial revolution, there’s been kind of a tug-of-war between labor and capital, capital being the people who run the factory, the management and the investors. There’s been a struggle with the labor movement to extract more of the wealth that’s created and give it to the workers, as opposed to returning it to capital. So that’s a built-in dynamic we’ve had in our industrial economy. Now, all of a sudden, robotics is getting to a point where we can automate job function, not just on the factory floor, but in service jobs. There are robot restaurants and hotels, and there will be more of this in the future.

Eventually, we’re going to have robot cars. If you look at a company like Uber, they want to be the robot taxi service for the world. Right now, they do have robots working for them – you just can’t see them. Uber has vaporized the dispatchers, and it’s now automated. They have a huge amount of drivers who report to a piece of software. And above the software are very small management and software engineering teams. A little further down the road, you can very easily imagine robot vehicles reporting to a robot dispatching system.

We can actually have humans and robots working together, collaboratively, on an independent basis as freelancers, and they’ll all be managed by a piece of software. I keep telling people about this, and they say, “What? That sounds like science fiction.” Today, we have these super computers in our pockets that give us the ability to access all the information in the world. We already live in a world of science fiction! So anything that seemed implausible a couple of years ago is now the norm.

I think people’s fear is that they’ll be interacting with robots; well, they already are. The humanization of technology, where robots are the middle-person, so to speak, disguises this. The face of a company is human, so it takes away that stigma to an extent.

So, what is there to fear besides obsolescence and media illiteracy?

I think it’s all opportunity. Change is the thing that scares people the most. And it’s funny – the people who are the most successful have the most to fear because they don’t understand this new system and how it works. They might lose their status. Conversely, the people who embrace it the most and who adopt it, not only as a business strategy, but as people who make it their top priority, will succeed the most.