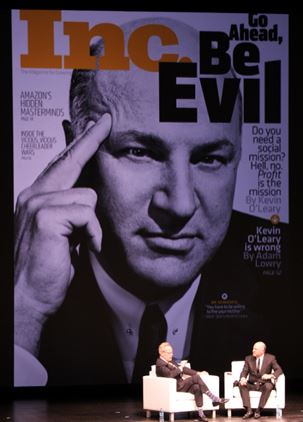 By Graham Marsden, Marketing Director at the Entrepreneurs’ Organization

Author’s note: EO has a partnership with Inc. Magazine, and we were grateful to have been generously extended access to their Iconic series of events this year. I attended this week’s event in Seattle as a Marketing Director from a non-profit organization helping entrepreneurs become their best selves. As such, I was keen to listen in for insights that EO members would appreciate. While Inc. did provide the ticket to this event, my opinions are my own and do not represent the Entrepreneurs’ Organization; this article has not been edited by Inc.com.

It was gratifying to me to see that dozens of EO members from chapters throughout the US, including Houston, Los Angeles, New York and Idaho, made their way to the Inc. Iconic Seattle event on Tuesday, 5 April. Hosted in a dark and immense concert hall, the event had a TED-style feel, while delivering perspectives from true icons in business, including two Sharks from ABC’s Shark Tank. Here are some of the elements of the day that stuck out for me: 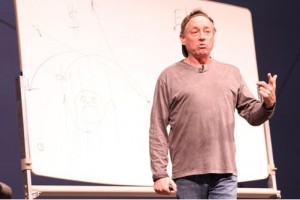 Greg shared his story of how he built CrossFit into a global fitness franchise and along the way, won over the audience with his wit, his considerable knowledge about health and wellness, and his frank way of managing a business with virtual offices worldwide.

“Wearables are all the rage. Everyone wants to put a thing on and measure something.”

“We live in fear of heart disease and cancer, but there’s something scarier than that: the nursing home.” According to Glassman, about 70% of people die from preventable health-related causes. The remaining 30% of people die from outside causes and accidents. His company is in the business of reducing risks and prolonging life for that 70%. If you think about it, that’s a pretty big market. While I identify a bit more with the perspective offered by this College Humor parody about CrossFit, I was very impressed by Glassman’s convincing arguments against soda (glug glug) and other sugars. It’s time, once again, for me to make some changes in my diet and exercise patterns. 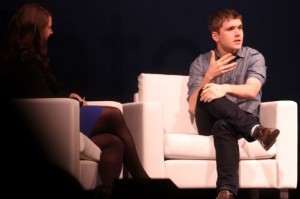 What impressed most about the next session, a sit-down interview with tech startup superstar John Collison, was his youth. He looked almost too young to have created an e-commerce giant worth $5 billion. While Inc. should be lauded for bringing in speakers that have had rocket-fueled startup success, it also brings with it a risk; Collison’s was one of those presentations where many in the audience were inspired, while many others were probably wondering “what the heck have I done with my life?” 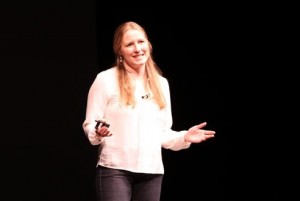 Danae Ringelmann took the stage next to share lessons from the early years of Indiegogo, which set the pace for an industry that would later (aptly) earn the moniker “crowdfunding.” Originally formed with the goal of supporting artists and filmmakers, IndieGogo has expanded to include virtually any kind of funding pitch – and has launched a companion platform, Generosity, to host campaigns for individuals in times of need, as well as various charitable causes. What impressed me most about Danae’s presentation was her commitment to supporting female entrepreneurs.

Beyond a higher participation of female entrepreneurs, Indiegogo also has a high percentage of female employees, as well as women in senior management – a standout in the male-dominated tech sector. Danae’s message was one centered on core values, and she drove home the point of building an engaged workforce genuinely happy with their jobs – and with their impact on the world. 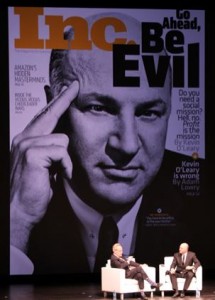 In addition to the various perspectives on business operations and financing, I was also very interested in the ongoing (and perhaps growing) discussion over Shark Kevin O’Leary’s constant drumbeat that businesses should not have social agendas and should solely focus on delivering value to shareholders. The tension over this perspective is palpable wherever O’Leary speaks, and this event was no exception.

Is this really the message that today’s business owners need to hear? I would argue that O’Leary’s advocacy of this “greed is good” mindset serves as a totem to those halcyon days of pure profit motive. It’s important to know this approach to business – because if you don’t know it, you might accidentally slip into it. But the next generation of entrepreneurs are likely to be faced with a new imperative in their businesses: to leverage technology to find new efficiencies which address various crises caused by overpopulation, pollution and other stressors to stability. And yes, there’s still going to be plenty of discretionary consumption, as well. But the industries and infrastructures which support this with manufacturing, technology and labor are going to be adapting their practices to meet the challenges posed by these global crises. 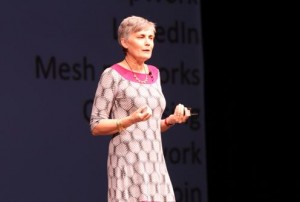 Fittingly, perhaps the most challenging and impressive presentation of the day came from the next speaker, Zipcar co-founder Robin Chase. Standing on the stage with an air of authority on the sharing economy (her company led the way before Uber and AirBnb), Robin asked the audience to consider the unsettling prediction that there will be a global job shortage that coincides with a global resource shortage in the coming decades. These economic stresses will be compounded by dramatic shifts in populations and national security brought about by a predicted increase in average global temperatures. The picture is stark.

My biggest takeaway from her challenging presentation was that one cannot solve exponential problems with linear approaches. Most of our attempts to address these growing crises have used traditional approaches of regulation, industry and mass production/consumption models. However, Chase asked the audience to consider a new model that she is calling “Peers, Inc.” When a diverse group of people are matched with a shared platform, they can find and form links to each other to solve shared challenges. Since change is constant, the best and only way to survive will be the use of excess capacity. We will no longer be able to afford, as a species, for items to be produced and go unused; for food to go to waste, for ideas to languish and for innovation to go unnoticed. The sharing economy will impact every industry where excess capacity exists and will be unstoppable.

Dejoria’s Q&A session was infused from origin to ultimate impact with environmental and workplace stewardship. His companies have taken extraordinary measures to reduce negative environmental waste from the production of shampoos and conditioners and have done so at great cost. But there has never been any question as to the motive behind these moves. In fact, DeJoria shared with an awe-struck room that since the inception of John Paul Mitchell Systems, fewer than 100 employees have left. That’s 36 years of operation. Clearly, he has won the loyalty of his workforce, and they stand behind these extra measures. 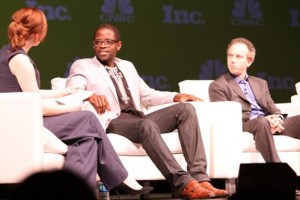 Panel Discussion on “Other People’s Money”

The next panel expounded on the realities of doing business after receiving VC and seed funding. From the perspective of business owners and angel investors, each addressed the operational mindset that businesses must assume when they are spending investor money. The point most clearly made was that venture capitalists are willing to risk losing their money. In fact, they may even expect to do so. VCs are investing in a new idea based on the small chance that it becomes a huge, stunning success.

“As an entrepreneur, it’s not your job to lose investor money slowly. Your job is to increase your chances of being super successful.” – Phil Libin, co-founder, Evernote 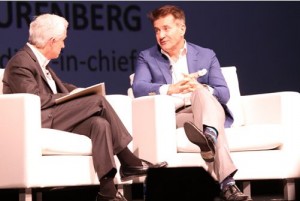 The day ended on a high note. Robert Herjavec’s background as a Croatian immigrant to Canada paints a true rags-to-riches narrative for one of the most recognizable figures in pop business today. Herjavec is the genuine article: industrious, lucky, compassionate and indelibly authentic. He advocated a more open stance on immigration, spoke vulnerably about times he had hit bottom, and shared stories about his volunteer work which helped him to realize how much he could give back. Event attendees were rewarded with Herjavec’s optimism and sense of purpose, which were infectious. On several occasions, he cast his own values as an alternative to O’Leary’s advocacy of shareholder value as the sole driver of business decisions. In this progressive Seattle auditorium, Herjavec, Dejoria, Chase and Ringelmann won the day.