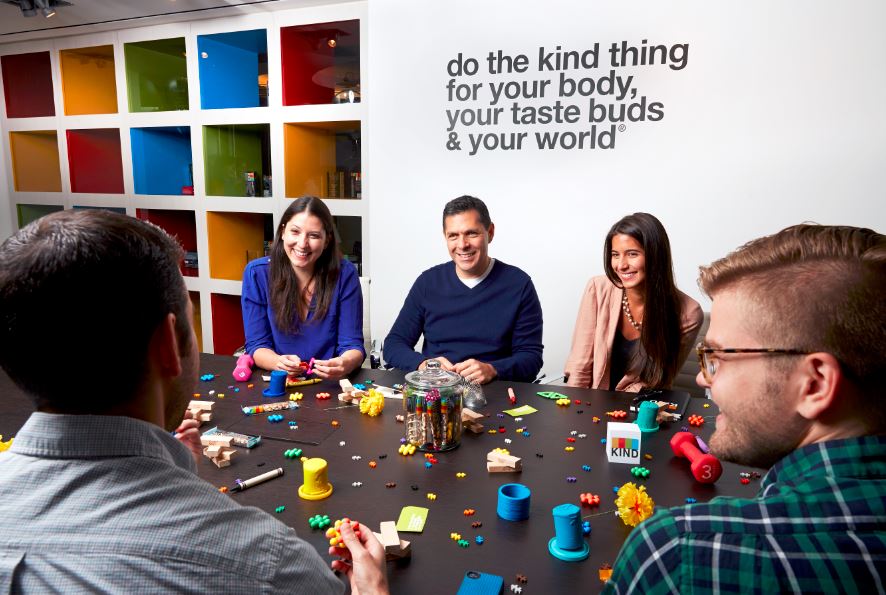 Daniel Lubetzky is the founder and CEO of KIND, which is among the fastest-growing U.S. snack companies and a leader in healthier snacking. Ashoka’s Michael Zakaras recently sat down with Daniel to hear more about the origins of the company and about why being kind is transformative.

Your focus on kindness has deep, personal roots. Tell us a bit about your father and your experiences growing up.

DL/ My father was a Holocaust survivor. He was 9 years old when the war started, and wasn’t liberated from the Dachau concentration camp until he was 15. And when I was 9, he started talking to me about his experiences – which of course included some of the horrors he lived through and witnessed.

But he also told me about the moments that helped him survive. And many of those moments involved the kindness of strangers. One that stood out especially – and a story he told me many times – was about a German soldier who, when people were not watching, threw a potato at my dad’s feet. This small act was a kind of lifeblood because it highlighted a common humanity and hope even in the bleakest circumstances.

When I was growing up and thinking about what I wanted to do with my life, these stories guided me. I wanted to do my part to make sure that what happened to my dad would never happen to others. I was motivated to help people to connect with one another and discover our shared humanity.

In fact, wasn’t your very first business founded on these principles?

DL/ Yes. When I was 26, I founded Peaceworks as a food company that brought together Israelis, Arabs, Turks and others in conflict regions to make and sell various food products from the Middle East. That economic cooperation helped bridge divides and cultivate mutual understanding among neighbors. Twenty years later it’s still in business, and while we obviously haven’t solved the Israeli-Palestinian conflict, the company has helped form many meaningful relationships and shatter cultural stereotypes.

Where do your entrepreneurial instincts come from?

DL/ My father was an entrepreneur so I’m sure that played a role. From an early age, my initiative took many forms – teaching myself magic so I could do magic shows, buying wholesale goods and then selling them to other kids, learning many languages. I also think my entrepreneurial temperament came from a survival instinct. I learned to ask myself: if I were ever in a situation like my father’s, what would I need to be resilient?

And finally, having unconditional love and support from my parents played a big part – it’s so much easier to take risks and initiative when you have that foundation.

Do you find yourself having to explain to people the relevance of kindness to business?

DL/ Yes, a lot of people see what we’re doing as antithetical to business and the competitive environment. In my opinion, they’re wrong. It’s important for people to know that I’m not doing this because it makes me feel warm and fuzzy.

For me, empathy is an existential question – it’s about the survival of the human race. That is, it’s imperative for us to overcome the challenges we face. Unless we can join forces and recognize each other’s humanity, how can we do business together, let alone make progress on the increasingly complex and difficult problems in society?

What’s interesting is that as my thinking has evolved – I’m on my fourth business now – it has become clearer that empathy and kindness offer a distinct competitive advantage. When I understand people with ease, I can accomplish more in both my business and my private life. Being able to access these skills is especially valuable in those moments when you feel threatened and your fight/flight instinct kicks in. If you can ask yourself questions like, “where is this person coming from?” then you’re able to get to a more productive place quicker, thereby creating value for business and society.

How do you institutionalize this into the culture and norms of your business – or for that matter other businesses – so that it doesn’t rely on a champion like yourself?

DL/ You know, some people think I am some sort of special human being who is unusually kind. But this isn’t true at all. We all have this capacity, it’s just that we’re governed by the systems and structures in which we live and work – and by incentives and culture.

So at KIND we’re always thinking about how to create that right culture. It’s made easier by the fact that acting out of kindness makes you happier too – so there’s an enlightened self-interest actually, and it can be quite addictive.

We try to create easy ways to recognize each other’s acts of kindness. One specific thing we do is called “Kindos.” I – or anyone in the company – can recognize a colleague with an email sent to an internal address and they are pinged in real time. It sounds simple, but it helps people celebrate and more regularly spot opportunities to be good humans. It also helps everyone in our community feel like co-owners, much as we would in a family.

You’ve talked about wanting to create a movement, using your company as a platform, but is there a danger that acting out of kindness will become commercialized and cliché?

DL/ It’s an important question because part of what makes kindness so magical is a purity of intention that can be lost if it’s manipulated with. We all know that if you try to inspire actions through inauthentic means (for example, by saying “you will win this if you’re kind”) it just doesn’t work.

Over the years, we’ve tried different ways to inspire kindness among our community. For example, we have a monthly ritual where anyone can share and upload a socially-impactful cause they care about, and winners are supported with grants and staff time. So the ideas come from the community, and the way you get to vote is by pledging an act of kindness yourself.

Our team also carries around #kindawesome cards to give out when someone – a friend, stranger, or anyone in between – does something that is authentic and kind. Here again, the idea is to create more opportunities to celebrate this natural capacity and create a ripple effect. Recipients not only get a snack in recognition, but they also get a card to pass on to someone else.

And most recently, we’ve established a foundation that is a separate entity, allowing us to champion kindness in new and exciting ways.

DL/ Well, we are always searching for that elegant balance where our business and social missions reinforce one another. This is what excites me most: how do we create the right kind of culture within companies – and not just ours? How do we challenge what business and capitalism are in the first place, and how people interact with brands, so that more companies can become effective vehicles for transformative change?

KIND’s advantage is that we’re privately held, so we can challenge conventional wisdom and break the rules with more impunity in terms of what a for-profit company looks like and achieves. This gives us more freedom to question whether traditional business assumptions are true, and to pursue something that is both economically sustainable and socially impactful. We’re not there yet, but let’s hope we can begin to demonstrate a new normal.

This article was originally published by Ashoka on Forbes.com. Ashoka, the largest network of social entrepreneurs worldwide, is a partner of the Entrepreneurs’ Organization.