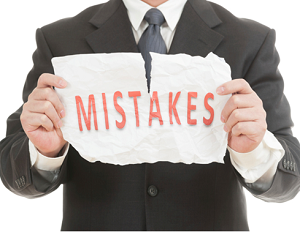 By Mike Maddock, an EO Chicago member and president of Maddock Douglas, Inc.

In 2002, the fecal matter officially hit the fan at Maddock Douglas. During a brutal three-month period, the firm I had founded 11 years before lost 45 percent of its revenue. For our people, it was like watching a train wreck. Three of our biggest clients took a right turn that we didn’t anticipate; one was acquired, one was getting out of the business we supported, and the other was being downsized by investors.

I did what many entrepreneurs would do. I held a pep rally. I gathered our team, told them we would sell our way out of this—we always had before—and that together we would emerge victorious in the face of this horrific injustice.

While it seemed like the only thing to do at the time, looking back, it was a massive, albeit common mistake.

I did do one thing right; I privately asked our COO to keep me from sinking the company. I said, “Dave, we are going to do everything we can to plug this hole, but I need you to tell me when we’ve taken on too much water. Don’t let me ruin what we have here with my untethered optimism.” Three months later, Dave walked into my office, closed the door and said, “We need to talk.” Boy, did we ever. He spent the next two hours taking me through charts and graphs—the “you’re killing the company” graphics. All of them were covered with red ink. There was no good news. We (read: “I”) had burned through 1.4 million dollars in reserves, and we were running out of time and money to set things right.

The next day, we made the gut-wrenching call to lay people off. These people were my friends and had trusted me to figure things out. I went home and literally sobbed myself to sleep. It was the most horrible day of my life.

Here’s the thing, I believe every company led by an “Idea Monkey” will eventually run into the same situation, unless they learn the lesson that I did. The lesson is simple: balance matters. We were out of balance and in desperate need of a “(Ring)leader.” Since I was so passionate about new ideas, sales and inspiration, I had unwittingly built a culture and organization which looked and acted like me—great at ideas, not so good at focusing and implementation.

Successful companies have mastered the essential balance between the creative idea people and the focused, operation-minded people; between the Walt and Roy Disney’s; between the “Idea Monkeys” and “(Ring)leaders.”

Fast-forward 10 years. We hired a “(Ring)leader” who has helped completely transform our business. In fact, the terrible chain of events I just described actually led to the birth of two new companies and the rebirth of Maddock Douglas as the nation’s leading innovation consultancy.

Is your entrepreneurial venture going to fail? It likely will if you build a culture that never gets around to focusing on the things that matter the most. Your job is to add leaders who know how to tamper the Idea Monkeys on your team who keep piling new ideas on old ones. You must realize that to liberate and leverage your strengths as entrepreneur, you need to partner with a trusted (Ring)leader.

Here are three of the most essential reasons why:

1) So you can work your magic: This frees you and other “Idea Monkeys” up to focus your super hero creator energy and passion for thinking big and doing big things.

2) So you can be more profitable: This help you drive out the chaos, not the creativity (high performance people need a high performance environment—chaos is limiting, inefficient and gets in their way).

3) So you can stop feeling guilty: This helps you minimize the impact of your weaknesses (on the organization). Most entrepreneurs need help with consistency and follow-through to create a sustainable, healthy environment as a result of constructive habits and rhythms.

Humility matters. It’s not enough to just have both mindsets existing in your company. The complementary magic comes from having a “love affair” and appreciation for how the two mindsets work together to give the entrepreneur an extraordinary advantage. Walt must love and respect Roy, and vice versa.

So “Idea Monkey,” who is your “(Ring)leader”? If you don’t have one, I can give you 1.4 million reasons why you should find one immediately.