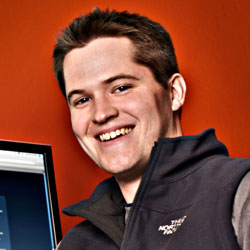 By Tim Hamilton, an EO Austin member and CEO of Astonish Design

It was 8:55 a.m. on a Monday, and I was sweating bullets. In five minutes, I would convene our daily staff meeting … but this one would be different. This one would be terrifying. I planned on sharing some key financial information with my employees that, until then, was only privy to me. I hadn’t slept all night. My palms were sweaty. I was a wreck. In the pit of my stomach, something told me that once I let this genie out of the bottle, nothing would ever be the same.

Let me back up a little. My small business, Astonish Design, is almost 14 years old. We develop web and mobile applications, and awhile back I noticed that our growth had started to level off. The tactics that had recharged us before—intensified business networking, new services, cost observation—now failed to move the needle. Although I had isolated the obstacle I thought was impeding us, I found that removing it would force me from my comfort zone. Talk about dangerous territory!

I looked to my EO network for guidance. Specifically, my accountant, EO Atlanta’s Greg Crabtree, who pointed me toward a solution. In his book, Simple Numbers, Straight Talk, Big Profits, Greg states that a metric called Labor Efficiency Ratio (LER) is “the most essential ingredient to a profitable business.” After conferring with Greg, I discovered that our target LER was well below where it should be. So, I made a decision: I would show my employees the hard numbers and explain the challenge. The idea alone had my stomach in knots. I was going to be asking my staff, none of whom are slackers, to deliver more gross profit per day of work. I worried that they would call me an unfair, greedy leader … and walk out.

At 9 a.m., the meeting started. My heart in my throat, I made my pitch. When it was their turn to respond, I braced for howls of protest and resentment. Instead, I got a surprise. My staff immediately understood the LER concept and why it mattered. It was as if I had lifted a great veil. Someone even asked why it had taken me so long to share the concept! Far from walking out en masse, my employees turned the task of improving our LER into a spirited competition. And rather than seeing me as an unreasonable task- master, they eagerly took on more responsibility for the company’s fiscal health. I was floored. Not only were my fears of employee resentment groundless, but my big, scary step toward greater transparency spun off positive outcomes I hadn’t even considered.

Since that first meeting one year ago, our revenue has grown by 42% and our operations have become more systematic. The more I shared information with my team, the easier it became. Transparency is now how I plan to make my business scalable. Many peers with professional service firms lament their lack of scalability. They imagine that if they were in a product business, customer requests would be more predictable, mechanical and easier to systematize. I felt this way for years, but what I discovered is that transparency is the key ingredient to making knowledge work scale. Armed with more information, my team is now able to self-manage themselves. They’re making decisions as I would because they’re operating with the same information. I have transparency to thank for that.

Beyond having an almost instant impact on a critical business metric, that initial staff meeting opened my eyes to the tremendous benefits of transparency in business. Not only did sharing information take some of the burden off of me, but it gave my staff a greater sense of urgency over our company’s success. Yes, I had let the genie out of the bottle, but now I wouldn’t want to put it back, even if I could.