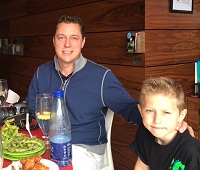 Quite recently, I had the wonderful pleasure of being stranded in an unfamiliar city for an indefinite period of time with two bored, exhausted kids, and a wife that was ready to disown me. It may surprise you to learn that my use of the word “pleasure” is not at all sarcastic. What started out as a disaster delay in the middle of our vacation itinerary, turned into a truly pleasant experience with the help of EO South Africa – Johannesburg.

Sometimes even the best laid plans don’t take you where you think they might. We were on our way to Brazil after a terrific couple of weeks traveling through South Africa for both holiday and business. However, we were asked to disembark the plane due to incorrect travel visas to Brazil. Now stuck at the Johannesburg International Airport, it dawned on us that we were going to miss our connecting flights, lose out on our hotel reservations and break all the plans we had made in Brazil. Moreover, we were now stuck in the city and couldn’t get out for five days. We had no idea what to do, where to stay and had no contacts or friends around.

After checking into a less-than-desirable hotel, my wife, less than impressed with my attention to Brazilian visa laws, suggested that we try and reach out to the EO community in the city. As a chapter officer in Vancouver for the past five years, and as a former Chapter President, I’ve been on the other side of this equation many times. We always have EO members traveling from abroad into Vancouver, so we are often entertaining, taking people out on the town and just generally making sure any EO member feels like they have a friend in our town. I elected to email the entire chapter … and had no idea what I was in for.

Roughly 45 seconds after sending out my email, responses started flooding in. I received email after email from members hearing my SOS and offering assistance with anything and everything. Then the phone in our hotel room started to ring. As I answered it and began speaking with members who tracked me down based on the location I had indicated in my email, the other line continued to ring and ring. The front desk realized they needed to staff up just to handle the call volume of my hotel room. They were getting more calls in one hour for me than they did the entire evening for the rest of the hotel!

This is when I realized I was dealing with the EO South Africa – Johannesburg chapter, a chapter that clearly takes hospitality and EO community seriously. I had to dedicate three hours each night for two nights in a row just to make sure that I responded to every member  who had reached out to me. Close to 50 members (about half of the entire chapter) took the time to reach out and offer assistance. From offers of cell phones to dinner, breakfast to BBQ (I learn it’s a “Braai”), rides, drivers, parties, concert invites, water skiing and pool time, nothing was left wanting. Anything we needed, they were there to fulfill.

This is a true testament to the chapter’s pride of country, connection to community and just general fantastic nature. Although they are a long way away from other EO chapters, they are connected to EO Global, and it shows. Their overwhelming response is a testament to both the leadership of their chapter and the quality of membership that clearly exemplify the core values of EO. I honestly cannot think of any other organization in the world where this happens to this magnitude. EO members are a part of something significant, a network of leaders around the world that will take you into their homes, share their possessions and connect you with their families, friends and businesses.

For that, I am grateful. And I’m proud to call myself an EO member.