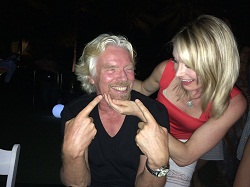 By Tonya Lanthier, RDH, an EO Atlanta member and CEO of DentalPost.com

After several days on Sir Richard Branson’s Necker Island with some fellow entrepreneurs—and one super entrepreneur—now’s the time to reflect on what I learned, and how I’m going to apply that to my business, DentalPost.

Looking back, I did some things I never imagined I would do.

Through it all, Salvador “Sal” Abascal, CEO of Mexico’s ALTA Rendimientos, informed us: “I have good news: We are alive!”

These exciting experiences inspired me and pushed me to go further.

Growing up as a tomboy, I was used to playing with boys. I competed with them constantly, and often won. I still compete with them today, as an entrepreneur. Sir Richard demonstrated over and over again that even among the most successful business people, there is still time for playing. We need it to ground ourselves, recharge and get a fresh perspective. Karen Bentlage, Sir Richard’s unwitting “victim,” told me: “It’s inspiring to spend recreational time with other entrepreneurs.” She arrived home with “renewed enthusiasm to think out of the box, get more involved in investing with other like-minded people and maybe even become ‘angel’ investors in the near future.”

Despite the demands of running a business and making it successful, there can be balance. Sir Richard stressed the importance of balancing all aspects of your life: work, family and leisure time. For women, it’s not always easy. Many of us are told we can’t “have it all” and be a mother. Well, I’m living proof that it’s not only possible, it’s gratifying! It is true that some men cannot handle a woman winning. But I love it when men and women harmoniously work together to achieve goals. I watched my grandparents run a business together for more than 50 years. In my own case, when people told me I couldn’t do something because I was a girl, it made me try harder to prove them wrong!

Another person I met on Necker Island is a champion for women entrepreneurs. The wonderful Jo Burston has started the Rare Birds initiative to enable women around the world to become entrepreneurs. Jo said that when she recently traveled around Australia and asked schoolgirls what an entrepreneur was, most of them didn’t know. The ones who said they did know answered, “A man.” She told me, “From igniting passion in the young, to helping aspiring women entrepreneurs overcome the unique challenges they face, Rare Birds will challenge the existing cultural values and attitudes hindering growth in our global economy.” She also pointed out that the power to create jobs is cut in half if women are not actively engaged as entrepreneurs. Women can and do create jobs. Time to harness that energy!

Jo will be partnering with Sir Richard’s Galactic Unite team to support and nurture future women entrepreneurs. That attitude of empowerment is, without a doubt, a high priority with Richard Branson. Not only does it allow employees to be their best, but it also allows you to confidently delegate to them. Then “get out of the way.”  Allow people to succeed (or fail and learn safely) on their own.

My new friend Paul Kirchoff, CEO of , is one of the world’s leading Internet marketing experts. He sees Sir Richard as “someone to be respected and admired because of his great accomplishments and his ability to release any constraints on his dreams.” He put it well: “Richard Branson is no different than the rest of us entrepreneurs. He dreams just like we do.  He takes risks just like we do. He has to hire great people just like we do.  He is competitive just like we are.” My friend and EO mate, April Cleek, CEO of EHR Concepts, connected with Sir Richard and his wife, Joan, as they shared family stories. They made a big impression on her as “people who love to change the world, love their families and people who dream big.”

That’s what I think was most inspiring of all. Hearing the stories of all these wonderfully successful people — including Sergey Brin and Larry Page, founders of Google, who happened to drop in — was amazing. They were just like me. We all are driven to be successful and happy, confident and humble. We are looking for ways to help people and make the world around us better. “We learned inspiration and belief can go a long way,” Bart Wisniowski, the co-founder of Bucketlist.org told me. And he shared this lovely thought: “The road between your starting point and destination is not a straight line. Rather it’s a beautiful zig-zag to be cherished and enjoyed.”

Well, I will cherish my time on Necker Island like nothing I’ve ever known. It was the biggest trip of my life. Thankfully, Scott MacDonald, President of Noise Solutions, served as our personal photographer, so the memories of every zig and zag will last. And Dione Spiteri, the prosperous businesswoman who brought us together for this unique experience, knows so much about the Traction model, we know where to come for guidance.

The peacefulness of the island wrapped us in an almost spiritual embrace. It was like nature and nurture all rolled into one amazing location. The people were incredibly supportive, and I will keep these relationships going. Like Paul Kirchoff said, it was such a pleasure to get to know such great, talented people, including “another smart friend who owns an island and is as real as the rest of us.”

One Response to “ My Visit to Richard Branson's Necker Island ”