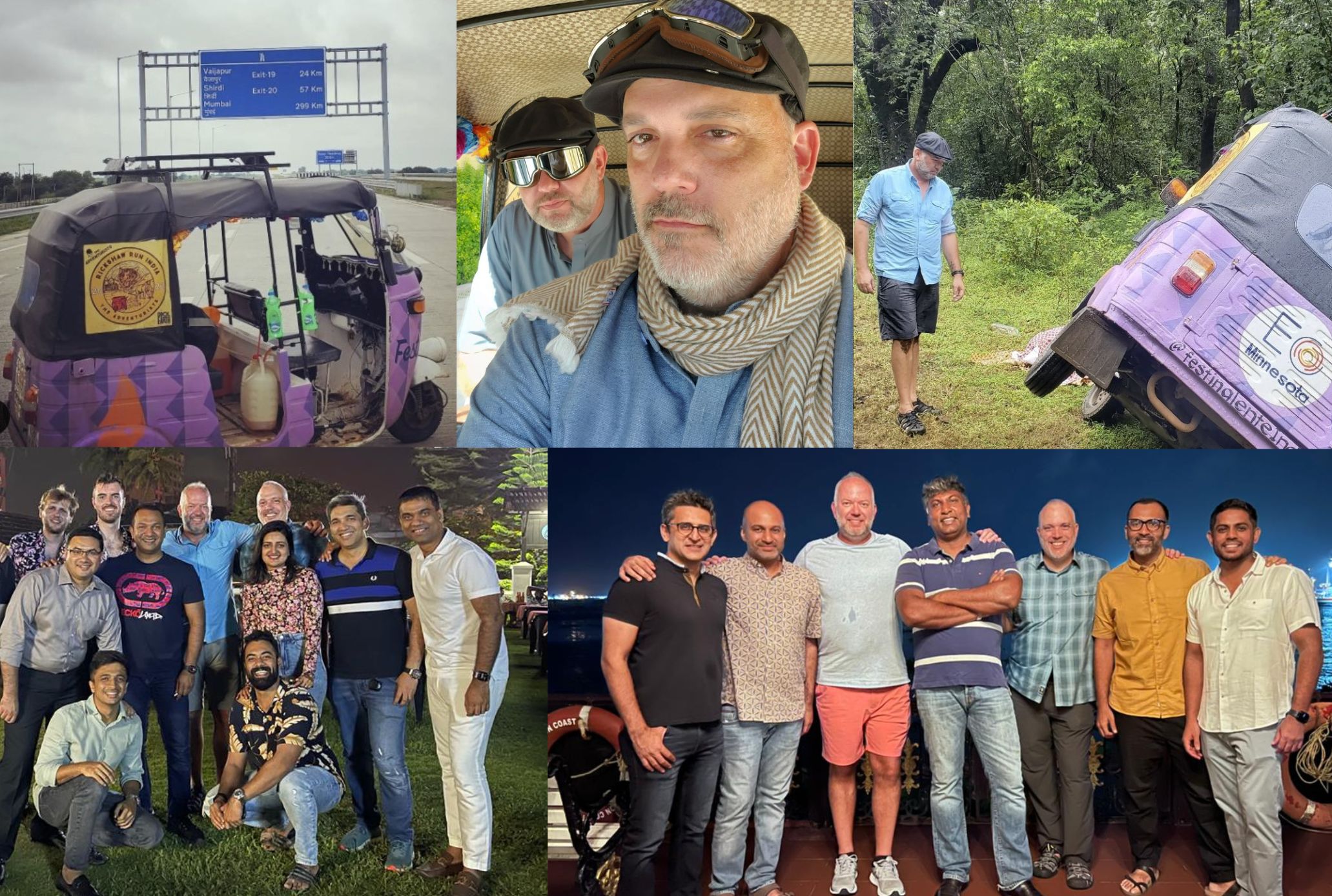 In addition to rethinking business strategies to help your company thrive, the new year is an ideal time to assess your personal journey and decide which bucket-list items to pursue.

If you’re the adventurous type (we see you, EOers!), take inspiration from Matt Haney of EO Minnesota. In 2022, Matt and his Forum-mate, Riley Harlan, completed a Rickshaw Run across India. We asked Matt all about it. Here’s what he shared:

What is the Rickshaw Run?

The Adventurists website describes the Rickshaw Run like this: “Imagine yourself and a couple of mates squashed into a 1 donkey-power rolling cake tin tackling thousands of miles of old-school adventure. There’s no set route, no backup, and no way of knowing if you’re going to make it. The only certainty is that you will get lost, you will get stuck and you will break down.”

Matt: The glorified lawnmower we drove across India was an auto rickshaw (or “tuk-tuk” or “auto” as they are often called). It is an open-air vehicle with three wheels, a 7-horsepower engine and top speeds of around 35mph (maybe faster when going downhill).

The Rickshaw Run is a loosely organized adventure in which teams of two or three people take on the two-week challenge of navigating a tuk-tuk from one end of India to the other, with no set route, relying on the kindness of strangers along the way.

That’s the adventure we signed up for, and we enjoyed (almost) every minute of it.

What inspired your recent Rickshaw Run?

Matt: I discovered the Rickshaw Run during a random YouTube rabbit hole, maybe 10 years ago. And it drove me to obsession! Covid and losing loved ones during the pandemic inspired me to get busy living. Thankfully, Riley Harlan (fellow Forum mate) was willing to join me on the adventure.

Riley: It started out as a way for me to test the business I built to see if it could manage without me for three weeks, while enjoying an awesome adventure. Once I was there, however, we kicked off the trip by meeting some great EO Kerala members, who were incredibly welcoming. Over the course of the journey, we met many wonderful locals who were incredibly generous, as well as other adventurers from around the world who were also participating in the Run.

We started in Fort Kochi, Kerala and finished in Jaisalmer, Rajasthan—that’s more than 4,000 kilometers (almost 2,500 miles). There were no rules, just a starting point and a finish line. It was 100% up to the participants to find the way from start to finish.

We were given a rudimentary tool kit and basic maintenance instructions on the rickshaw that required screenshots for future reference. Issues with the tuk-tuk were common, but we only had one major breakdown: a blown head gasket that sidelined us for the better part of a day. We also experienced consistent, persistent issues such as clogged fuel filters and a clogged carburetor.

Highlights of our two-week adventure across India:

The Rickshaw Run is an endurance test—the only winners are the finishers.  There is a Survivors’ Party at the finish line. But the journey along the way is the big win.

Did you choose the color and design of your rickshaw?

The Rickshaw Run allows each team to pimp their rickshaw by submitting a design that is painted onto it. Since Riley and I are in the same Forum, we thought it would be fun to include the EO Minnesota logo.

The design was a blast to figure out. We chose colors that were an homage to Prince, as was the Prince guitar on the front. Festina Lente is the name of our Forum, which aptly translates to “Make haste, slowly”. The turtle with the sail is the visual representation of Festina Lente.

My favorite part was the name we came up with for our rickshaw: Rocinante—the name of Don Quixote’s horse. Wikipedia describes him best: In many ways, Rocinante is not only Don Quixote’s horse, but also his double; like Don Quixote, he is awkward, past his prime, and engaged in a task beyond his capacities.

Is the Rickshaw Run a fundraiser?

The Rickshaw Run requires that each team have a charity. We raised US$5,200 for local Minneapolis small businesses along Lake Street via the Lake Street Business Council. We wanted to create awareness and show solidarity with the Minneapolis entrepreneurial community, which was devastated by both Covid and the 2020 civil unrest.

What surprised you most about the entire experience?

The people! The local people we met along the way were absolutely amazing. Every single day, people would ask us to pull over for a selfie, invite us for a chai, or even to stop for lunch. Every single day, and multiple times per day! It was unbelievably wonderful.

We also connected with EO Kerala members, who came out to support and encourage us, which was fantastic. On the night before we started in Kochi, we met Rohan Mammen, Rajeev Tharian, Mathew Mazhuvanchery, Issac Alexander and Sonu Vaidyan from EO Kerala South. Then, after the first day of driving, we were excited to meet new friends from EO Kerala North in Calicut: Vineeth Abraham, Zinekhar Ahmed, Nasly Mohamed, Varghese Alukka, Reshma Varghese, Ashique Tahir, and Vinay Kynadi from EO Kerala North. Our EO connection made the adventure more meaningful.

Along our route, we took advantage of Taj Hotels being an EO sponsor and got a 15% discount at all Taj properties, which coincidentally ended in September 2022 at the end of our Run.  So that worked out.  We stayed at many Taj properties, most notably the Taj Palace Udaipur.

Did you gain any entrepreneurial insights from this adventure?

Matt: Yes! I learned that I can be away from my business for three weeks and that everything was fine, if not better, without my presence or interaction

Riley: There was no option while driving to be anything but focused on the journey, something we rarely do. The evenings were filled with exhaustion, but also great opportunities to get to know people from all over the world.

Would you do it again?

Matt: Yes, please!!! How often in life do you get to shed your calendar, rely on the kindness of strangers, and troubleshoot in the moment—all while open-air careening down roads that were entirely unknown to us for 14 straight days? It was amazing! And it makes all other modes of travel seem boring.

Riley: I look forward to doing it again—and hopefully involving more EOers via a MyEO Group I plan to establish.

Riley Harlan, an EO Minnesota member, is the CEO of Symtec, an engineering firm that designs and manufactures specialized products and components for the marine, powersports, E-bike, agriculture, medical and E-vehicle industries.