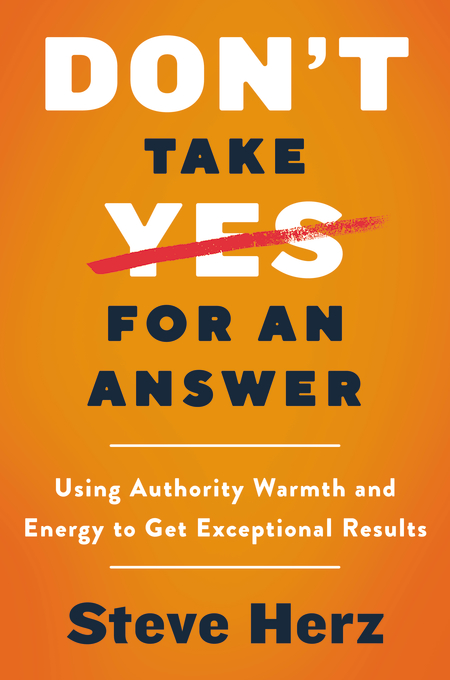 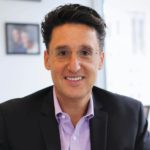 Contributed by Steve Herz, a talent agent for broadcast journalists. His new book is Don’t Take Yes For an Answer: Using Authority, Warmth, and Energy to Get Exceptional Results was released in June 2020 (Harper Business).

1. What do you mean when you say we shouldn’t take “yes” for an answer?

In the book, I lay out my argument that three factors over the past 30 years have created an artificial sense of excellence and created an echo chamber of “yes” for many of us—the participation trophy, grade inflation and the lack of firings by businesses, in lieu of euphemisms like downsizings and reorgs.

So the person on the wrong end doesn’t even know they could have done something better. And without that signaling, we get stuck in what I call the vortex of mediocrity.

There is no way to improve because we don’t even know there is something to improve upon.

2. Why did you write this book? 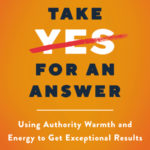 Four years ago, I decided to take what I had learned as a talent agent, coaching on-air talent, and apply it to businesspeople and organizations that had nothing to do with media (bankers, doctors, lawyers, etc).

At a speech on 8 March 2017, someone in the audience on International Women’s Day at Bank Leumi, asked me if she could buy two copies of my book. I sadly told her that I didn’t have a book and she said, matter of factly, “you should write one.”

Ultimately, I wrote it because when she asked me that question I decided I had something to say that was unique and helpful—and hopefully people will agree.

3. You argue that the key to success is to develop your authority, warmth and energy. What are these elements and how did you come to identify them?

Over my career, I observed that the people who were succeeding at the highest levels had influence over the room. They were able to make others like them, trust them, believe in them and were motivated by them.

AWE is a shorthand way to achieve that—authority, warmth and energy. It’s intended for people who already have the substantive qualities, technical expertise, and experience.

If you have all that substance, as well as stylistic authority, you’ll come across as someone others believe and believe in. That’s in your voice, demeanor, body language, and many other things discussed in the book. And if you have stylistic warmth, you’ll connect with others and engender their trust—which is absolutely essential for any relationship. And if you have the ability to energize others, you’ll be able to have influence. Without it, I’ve seen many people work extremely hard and never come close to achieving their potential. Which is very sad because this is a learnable skill.

4. How does this framework for success apply to entrepreneurs running businesses?

It applies to entrepreneurs especially since it’s so vital to attract a good staff and to retain and develop them—while also attracting customers. In almost every business, your product is similar to something else in the market, and most people and businesses are somewhat commoditized.

But the quality of a connected relationship built on the principles of AWE will never be commoditized. It will build a cohesive loyal organization with loyal customers.

5. What are the signs that an entrepreneur might be stuck in the “vortex of mediocrity,” as you say?

That should be fairly obvious to the person based on where the business is in its life cycle. An entrepreneur is generally not someone who will be satisfied with the status quo so I think this vortex is less likely for he or she personally. But the business may not be asking the right questions about where its product sits in the marketplace and what can be done to improve it.

The ultimate question is: What questions am I asking myself daily and is this leading to improvement? Or am I just settling for the status quo day/week/month/year in and year out?

6. What is the most important thing you hope entrepreneurs will take away from your book?

To understand that constructive feedback is not something to be feared. The absence of feedback is what you should fear. What you don’t know can hurt you and will ultimately hurt your business.

And your leadership style is what can hold you and your business back from greater heights…so change your mindset and you’ll change your life.

Entrepreneurs’ Organization is a global community of informed, engaged and curious business owners and founders.