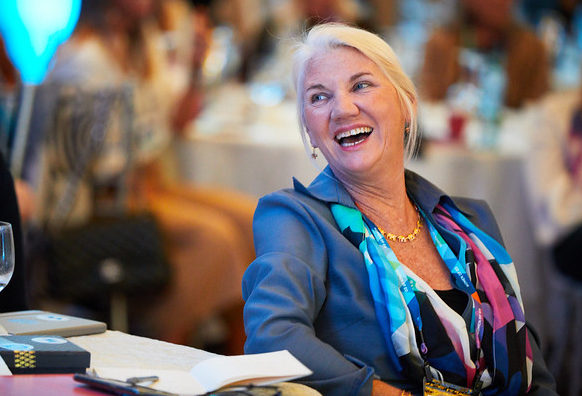 In August 2019, Kimberly Hickok Smith spoke at the MyEO Women of EO Summit in Bogota, Colombia. While sharing her professional journey—from tween entrepreneur to international executive—she also spoke to the audience of men and women about supporting each other and making a difference in the world.

I was the first elected president of EO and the first chairman of the Global Board. Given that I am also a woman, I guess that makes me the first Woman of EO. I wasn’t the first female member, but I was the first of any gender to hold these important leadership positions—and I believe that says something important about the ethos of EO and how the organization sees everybody as equal and of value.

When I was 8, two of my brothers were killed in a car accident at ages 12 and 16. My parents divorced soon after. These events really formed the way I view life. It taught me to live every day in case there is no tomorrow. And I learned to live outside the box and to sometimes breaks rules.

I started my first business when I was 12, Kim’s Katering. I was basically cooking and organizing parties for my mother’s friends, but it grew enough that I had to hire college students to serve drinks because I was underage. At 16, I started a trading company buying and selling art from Brazil and other places in Latin America.

Eventually, I moved to DC to study international relations and languages at Georgetown and completed six months in Brazil for economics. One of my part-time college jobs was as a receptionist for an international trade firm. Within three months I was promoted to vice president and I was hooked on trade. After graduation, I got married and was hired by a big firm.

Then I was in a car accident and I broke my neck. Six months in the hospital changed the way I looked at life yet again—from living one day at a time to looking toward the future. I knew I needed to start my own firm that acted and reacted the way I wanted, that worked to build fair trade in Latin America and Africa.

My mother lent me US$1,000 and I was off! My first contract was in Honduras, and all the bid docs were in Spanish. Imagine my surprise as I translated that among other things I had to purchase 3,000 artificial vaginas—for cows! Getting financing for the contract was a struggle. All the banks said, “you are a 23-year-old girl with a new company; no money for you!” Even so, the company eventually did very well and less than two years later, I was flying my mother to DC to watch me be awarded the exporter of the year award! 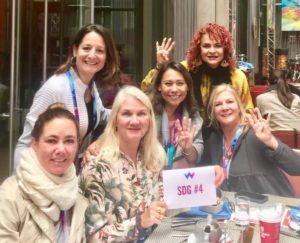 Intercon International trading and consulting was a force to be reckoned with—that “young blonde woman” traveling all over the world, on the cover of business magazines and doing deals all day on my five-pound car phone. My clients were all in the then “under-developed world” of Latin America and Africa and a typical trip was 16 countries in 18 days. We focused on south-south trade, built technical training institutes, sold Brazilian cattle dip to Somalia, made creams in Guatemala, sold fuel bladders to Zambia and just about all you could imagine.

Days were exciting, hectic and fun but often challenging with no one to talk to or to answer the many questions that arose in my mind every day.

My father, Ray Hickok, also had that need to share with his peers, and he founded YPO around the time I was born. So I saw from an early age the importance of support and camaraderie with like-minded executives who could grow together by learning from each other. I understood the need for a safe space to discuss issues and learn from peers. I also understood that the chances of my qualifying for YPO at that point were slim, and plus I realized that the challenges faced as an entrepreneur, someone who started their own business, are very different from those faced by a hired executive.

By the late 80s, Verne Harnish approached my father about being the honorary founder of YEO (in those days, you had to be Y for young). Dad came to DC to have a meeting. Charming Verne convinced my father, who loved the idea of working with young people with big ideas. As for me, I met all the criteria of YEO—a 20-something-year-old doing more than US$2 million per your year—apart from having at least 15 employees. So they changed the criteria so I could join!

A few months later, Verne was feeling like he wanted to start his own business so he asked me if I would take over the reins and grow the fledgling organization and professionalize it. I said yes.

It was clear that EO could be something of real value and I jumped in to help grow it. Starting by providing space in my corporate “barn,” hiring the first executive director and hosting some of the first international events. I was elected the first president of the organization with my father and about 40 YEO members in the room, which was very special for both of us. I am proud to say we created the succession plan which is now EO Path of Leadership and we also started the Entrepreneurial Masters Program (EMP) at MIT program, among others. 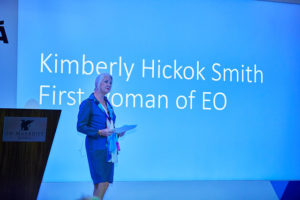 And look at EO now! We’ve had eight women global board members, a female global chair and about 150 women in global leadership. And 1,859 women members!

The growth and development of EO is a beautiful example of how a tribe evolves to meet the needs of its members. The whole MyEO concept and movement is revolutionary and will keep the organization moving forward. Its focus on inclusivity is so important in that we all have so much to share. Your vibe really does attract your tribe.

In the early 90s, I am a 30-something and my business is growing well. EO is growing well. I have two adorable little blonde babes and a house in Architectural Digest. I have it all right? Well, maybe not. Washington DC was all about power and money, and I was very good at these things, but I wanted my children to grow up with different priorities.

With the support and encouragement of my adventurous and innovative EO peers, I decided to follow my dream to eradicate poverty and hunger and move my family to Kenya. I knew that the next three EO chairs were already in place and the management team had things under control. So I sold my EO-eligible firm and began my next journey, which would last until today. I’ve been working all over Africa for economic empowerment and creating solutions one step, one new entrepreneur, one child at a time.

I realized I needed to be purpose-driven not profit-driven. EO taught me the power of coming together and working together, and I have leveraged that knowledge and insight to change mindsets and conduct millions in trade from Africa.

I feel blessed to be a part of so many amazing initiatives—leadership transformation, organizational development, increasing international trade, helping develop self-sufficient associations, creating entrepreneurs and economic growth in 20 countries in Africa. I have realized that my main role is to bring people together to reach consensus, essentially building a tribe around issues that need to be championed for change.

A game-changer for girls

And it must have been a good decision to move my family to Africa because my daughters have returned to Kenya and want to raise their children there. Together, we have started a charity called It’s a Girl Thing, which provides menstrual cups to young girls and their mothers and teachers to enable them to stay in school with a sustainable eco-friendly solution.

In my years of working to eradicate poverty and hunger all over the African continent, our research has made it clear that the biggest economic game-changer is for a girl to stay in school. The UN reckons around 131 million girls worldwide are out of school. In Uganda, one country where I work, there are districts where 78 percent of the children, both boys and girls, between ages 8 and 12 report being sexually abused at school. If a girl can stay in school until high school, she can avoid early pregnancy and she can avoid HIV. Plus, with education, she can go on to a career and become a leader in her community.

My work in this field is one reason that I am so excited about EO working with the United Nations to make progress on the Sustainable Development Goals.

We have to remember that these girls I am talking about are part of our tribe and our future. We have the opportunity to do so much work together as a tribe—and some of this work must be to change traditional antiquated “tribal” practices. What are the tribal practices we think of? In Africa it’s marrying girls by kidnapping, selling or raping them, female genital mutilation and male circumcision ceremonies. There are also positive tribal practices in Africa, including caring for the extended family and keeping an open hearth for food.

What are those negative and positive tribal practices in your home country? How can you make a difference? Is there enough love, support, concern, compassion mentoring to build this better world? You know that whatever you can do on your own will be much stronger and better if you find your tribe of like-minded people with the same vision. 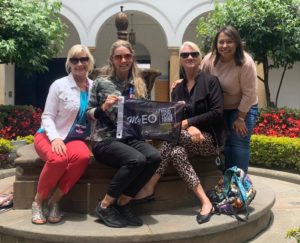 Let’s focus our attention on defining and building our tribal vision to build a better world together. Let’s motivate and inspire each other toward our common goals, find our place in the tribe and strengthen our branches.

Our tribe can lead the change and be the change. Women of EO is the tribe that can provide a global platform for mentoring, building, innovating and financing the future we want our children to inherit. Now that EO is back in my life and on my to-do and To-BE list, I’m excited to help build new chapters in Africa.

Together, let’s build our tribe to build a better world.

Learn more about why entrepreneurs choose EO and the MyEO Women of EO group.