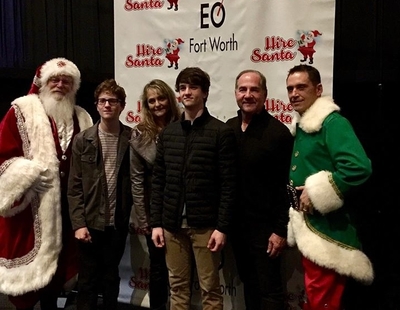 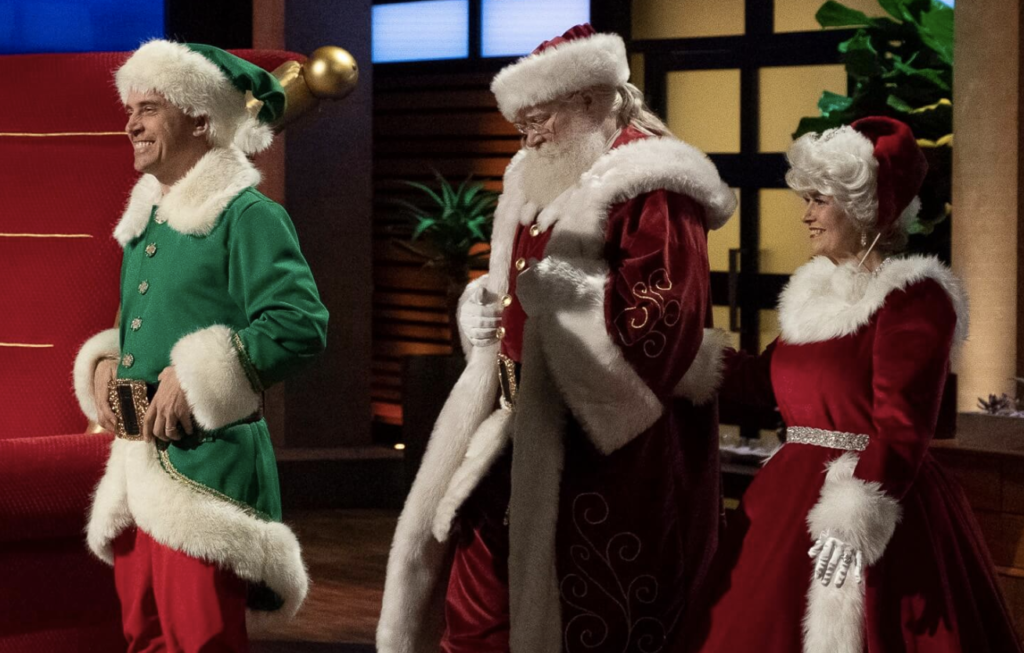 About 40,000 people apply each season; 100 actually make it on air. EO member Mitch Allen is one of them!

Mitch Allen, an Entrepreneurs’ Organization (EO) member in Fort Worth, is founder and Head Elf of Hire Santa, a service that brings the season to life with thousands of professionally trained Santas worldwide. On December 2, 2018, Mitch pitched the company on ABC’s Shark Tank.

Mitch shared with us the story of this once-in-a-lifetime journey—including how his experiences as an EO member proved invaluable.

As an entrepreneur, I’m drawn to the concept of Shark Tank. There’s the all-important pitch, creative sets, unexpected reactions by five seasoned investors and the possibility of scaling growth fast with a cash infusion and industry connections. It’s like the Super Bowl for entrepreneurs!

I’ve been an entrepreneur all my life–from buying baseball cards, comic books and antique Coke machines when I was young to flipping rental houses in grad school. I currently own several businesses, primarily in the legal and Internet marketing space.

My latest company, Hire Santa, started at an employee Christmas party in 2008 where I handed out bonuses dressed as Santa Claus. It was such a blast that I did it again in 2009. That year, a family friend asked me to appear for their child as Santa, and it changed everything. Being Santa to children is an unforgettable experience.

One thing led to another and people started to pay me to appear as Santa Claus. I got into it, appearing more frequently, charging more money―and then I ran out of supply. There wasn’t enough of me to do every event, so I started hiring other Santas.

I bought the domain name, created a website and quickly grew the business. It started as a hobby, but by 2014, with the support of my EO Fort Worth “Tamarindo” Forum, it became a real business.

At first, I was reluctant to talk about it, worried some might think it was silly. But it’s just the opposite—it’s an amazing company. We bring love, joy and the Christmas spirit to hundreds of thousands of people each year. I’ve never had a business that brings a smile to people everywhere the way that Hire Santa does.

My Journey to the Tank Begins

In January 2018, inspired by an episode of Shark Tank, I checked the show’s audition schedule and saw an open call one week later in Dallas—just a 40-minute drive away from me.

I went all in. I downloaded the application, crafted my one-minute pitch and waited in line all day at the Dallas Convention Center with 500 other hopeful entrepreneurs. Some had profitable businesses, others had a dream but hadn’t earned a penny. It was fascinating.

When called, I delivered my pitch to one of the six casting associates and thought I connected with him. The fact that I had revenue, a fun service and an interesting story played in my favor. Throughout the process, we were told not to expect a callback, so I was excited when they called less than a week later and sent more paperwork, contracts and extensive nondisclosure agreements.

The next step was to create a 10-minute audition video. So, I called 10 of my local Santas, found a Mrs. Claus, and filmed a video that I was pleased with.

They thanked me, but once again emphasized that most people wouldn’t get a callback.

Shortly thereafter, Hire Santa scored a huge contract with Bass Pro Shops and Cabela’s. While I was focusing on that win, the Shark Tank producers called to say that I was moving on to the next round, and would need to put together a real pitch. More contracts arrived, and I was assigned a team of two producers whom I met with every week on conference calls to hone my pitch and get my financial documents in order.

What can you learn from the man who Barbara Corcoran called a “great negotiator”? Mitch Allen offers tips for any entrepreneur who hopes to make it to the Tank in his EO on Inc. article.

This is the part of the Shark Tank process where EO proved invaluable. My Forum and fellow EO members were incredibly helpful and encouraging:

I can’t thank Nick, EO LA, EO Fort Worth and, of course, my EO Tamarindo Forum enough for supporting me before, during and after filming.

A Week in Los Angeles

My week in Los Angeles was a blur. I arrived on Monday, 10 September 2018 for the Friday filming. The show puts all of its entrepreneurs in the same hotel, so it was interesting to watch others prepare. I was surprised to learn that everyone who appears on the show is responsible for providing their own set and props―there’s no allowance or stipend.

I feel fortunate that I was likely over-prepared, which kept me calm throughout the week.

My 45 Minutes in the Tank 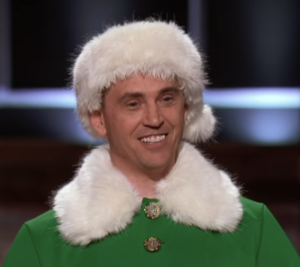 On Friday, we went to the studio to film. As I walked down the hall toward the Sharks, I could hardly believe it was happening. When you arrive in front of the Sharks, you’re asked to stand in silence for up to a minute while they set the cameras. If I hadn’t learned this from a former participant, it would have been quite intimidating.

I started my pitch, and everything went smoothly. My ask was a US$200,000 investment for 10 percent of the company. The sharks seemed to enjoy the spectacle of 20 Santas rushing in, bringing each shark a Santa hat to wear.

I was alarmed when four of the five sharks went out fairly early in the 45-minute filming process.

All sleighs led back to Kevin “Mr. Wonderful” O’Leary—the only shark left. He made an awful offer: US$200,000 for 50 percent of my company. I had practiced such scenarios and was grateful for the Victoria Medvec negotiation learning events I’d attended as a member of EO.

It was intense. All of the practice, research and deal scenarios I prepared in advance paid off. Even so, I was less than 30 seconds from walking out without a deal. I had many different strategies, but was not sure how it was going to work out.

I tried to control the room. I didn’t want to be intimidated or overwhelmed. We went back and forth, but couldn’t agree on valuation. (Much of our negotiation was edited out of the segment that aired.) Finally, I countered with a different structure, offering to repay his investment by sharing half the profits up to his US$200,000 investment, and then a 10 percent partnership.

That got Daymond John’s attention. He re-entered the negotiations. So then, I had two Sharks on the line. In the midst of pitting them against each together to improve my deal, Barbara Corcoran interjected, “I’ll do that deal at 10 percent, but you have to decide right now.”

I was thrilled! Barbara is known for giving strong support to the companies she invests in, so she was one of my top partner picks.

I smiled my biggest elfin smile: “Barbara, on behalf of Santa and all the elves at the North Pole, Hire Santa would love to do a deal with you!”

The night the episode aired, EO Fort Worth rented a movie theater and we held an epic MyEO event—140 friends and colleagues watched the episode together. My 45-minutes with the Sharks was edited to a nine-minute segment but I got to see moments I didn’t remember, such as Barbara hugging me and saying: “You’re a great negotiator!” What a pleasant surprise.

“When Mitch walked onto the Shark Tank set, he was wildly enthusiastic about his business. All the Santa Clauses that came with him were so jolly and well mannered, someone you would want to invite into your home to make your kids happy. On top of that, Mitch had a great business sense as to why his business was working well and what he had to do to make it even better.” – Shark Barbara Corcoran

Since the episode aired, I’ve been amazed by the massive outpouring of support and good wishes. My wife, Mysti, and I have received hundreds of calls, texts and emails. It’s a humbling experience, and I’m so grateful for every aspect of it.

Speaking of my wife: Every entrepreneur knows how hard it can be on our spouses; we ask so much of them because we’re “on” all the time. Mysti always goes the extra mile. In addition to watching and analyzing every episode with me, she has always kept our entire household running, which enables me to follow my dreams. She didn’t even complain that we were apart on our 20th wedding anniversary, which was the Wednesday I was in L.A. for filming while she stayed in Texas to take care of our children. She deserves a ton of credit for any success I have.

In the days since the episode aired, I’ve received hundreds of emails from people who want to hire Santa. We’re totally booked for 2018, but look forward to the exciting options Barbara’s investment will provide as we work to implement a new scheduling and calendaring process to organize hundreds of gigs in dozens of locations in one management platform.

Estimates put the publicity value from a Shark Tank appearance as equivalent to US$1 million in public relations. Our company couldn’t possibly get that much publicity any other way. From the number of emails I’ve received in the days since the episode aired, I can attest to the power of that exposure, which will help us for years to come.

Mitch Allen and his family at the EO Fort Worth watch event.

One reason I was able to succeed on the show is due to the power of experience share that EO models. By reaching out to people who’d appeared on the show, I gained valuable insights and strategies. I might not have understood the value in shared experiences if I weren’t immersed in Gestalt learning via my EO Forum, the Entrepreneurial Masters Program, and other one-of-a-kind EO learning opportunities.

Hearing what somebody else has gone through and how they navigated the challenges and unexpected twists life and business often bring can help significantly along our journey: I’m living proof.