Written by entrepreneur Jeremy Choi, CEO and co-founder of  WPUP Inc. A version of this article originally appeared Jeremy’s blog, where he shares his thoughts on leadership, relationships, fatherhood, entrepreneurship, productivity, and more.

Steve Jobs was arguably one of the best presenters to ever grace a stage. His presentations were inspiring. In fact, every one of his speeches received a standing ovation from the audience. The secret behind his success was a series of steps he routinely followed.

I’ve developed my own steps for successful presentations—and I’m sharing all 10 of them here.

TIP ONE: STORYBOARD WITH PEN AND PAPER

Most of us are so accustomed to using computers that we forget about the benefits of using pen and paper to brainstorm and organize our thoughts. There’s something particularly helpful about drawing your ideas, organizing your thoughts and changing the order of your paper slides—all before you even touch your keyboard.

When I design my keynote presentations, I do everything on paper first. It helps me design slides and sharpen my focus.

TIP TWO: CREATE A SINGLE SENTENCE DESCRIPTION FOR EACH IDEA

Long-winded descriptions in a presentation are confusing and distracting for your audience. Instead, condense your descriptions so they are shorter than the historical 140-character tweet. Not only is this approach easier to understand, but also it’s more aesthetically attractive on a screen.

I want the focus to be on me and my ideas, so 90% of my slides are usually just one to three words.

Audiences react to a force that opposes them and often lean toward a hero. Make your services or brand the hero and create an arch nemesis your brand can defeat. It’s a classic strategy for film and storytelling.

Consider yourself the storyteller of your brand, and create a story for your brand with a clear villain for people to rally against. The options for potential villains are endless. It could be a certain type of consumer. Maybe it’s the old way of doing things.

Your audience cares little about characteristics of your product or what makes your product great compared to the competition. They do care about how they will benefit from your product or service. Make sure to focus on what matters to them, not you.

In all of my presentations, I put “about the company” near the end and the benefits to the audience at the beginning.

TIP FIVE: STICK TO THE RULE OF THREE

Three is a magic number. It’s large enough to give credibility to what you are saying, but small enough that your audience can remember the points. If you go beyond three points, your audience won’t remember your message.

People don’t buy services; they buy the “why.” That means they buy better lives for themselves and for those they care about. So forget your services and sell the “why” from the perspective of the consumer.

Steve Jobs never used bullet points. They are too commonplace and add little to your message. Instead, focus on images and graphics to communicate your concepts and connect with your audience. It’s proven that people remember imagery better than they do words.

In my presentations, almost every slide is an image. Often, it’s just an image without words.

Whenever you mention a statistic, make it meaningful to the audience. The larger the number, the more important it is to place that number into context. Keep the number on the screen, but talk about it. Remember, keep the focus on you.

Not all of your audience is going to know your industry jargon. If you use acronyms or insider terminology, your audience will likely tune out. Instead, use plain English to ensure everyone understands you.

Steve Jobs spent hours practicing his presentations until they were perfect in every aspect. This made his presentations look effortless, though it came at the cost of hours of work. Practice at least 20 times—out loud. Walk like you were on stage. The more you seriously practice your part, the more confident and comfortable you will be. 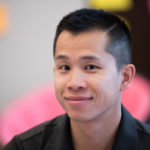 Jeremy Choi has been a member of EO Toronto since 2012. He is currently on EO’s Global Technology Committee. If you’re an entrepreneur who wants to make a positive difference in the world, consider joining forces with your peers by joining EO.