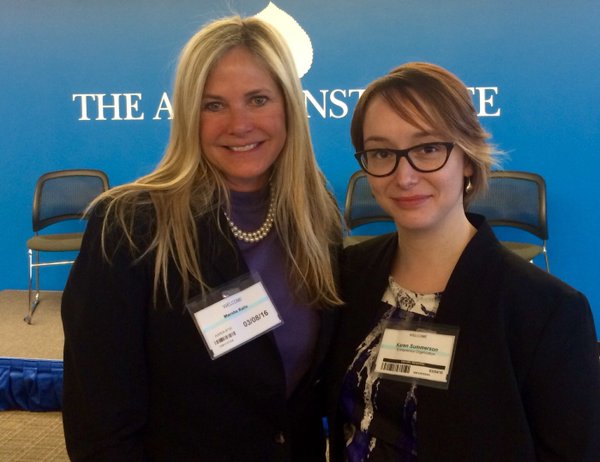 By Karen Summerson, Writer/Editor at the Entrepreneurs’ Organization

I was fortunate enough to attend The Aspen Institute Forum on Women and Girls: Conversations Across Generations last week with EO DC member leader Marsha Ralls. On the heels of EO’s successful #WOMENtrepreneurs campaign and a published conversation with Associations Now, this opportunity seemed to be a timely continuation of the larger conversation surrounding women’s role in contemporary economics.

And so it was. I was in a room filled with global change makers, women and men who are dedicating themselves to the empowerment of historically disenfranchised populations – and the buzzword was “intersectionality.” Intersectionality was coined by professor and theorist Kimberlé Crenshaw in 1989 and is defined as “different forms of discrimination interacting and overlapping.” In the past 27 years, it’s broadened beyond race to include other social factors, such as nationality and class. The Aspen Institute Forum took the meaning one step further to include work experience directly connecting to other aspects of our personhood. For example, working mothers bring to their career influences of parenthood, as well as race, class, orientation, etc. The experiences associated with these identities inform their work.

Last November, we looked at many identities and experiences that influence an entrepreneur’s career (#TotalE), and I see intersectionality as the next, deeper step in this conversation. For the purposes of this conversation, I would argue women cannot compartmentalize different roles in their lives; their roles as daughters, leaders, activists, athletes and/or mothers impact their role as working professionals. But this isn’t a downside, as we may have formerly been told; rather, after listening to the many panelists, we are counting on this diversity and wealth of insight to change the economy – and the world – for the better … IF we are willing to better embrace women in the economy. This means further discussion surrounding how these identities intersect. It means making necessary changes to add more women to the workforce and meeting their simultaneous roles as caretakers and vital family pillars. It means a continued breakdown of systematic bias that deters women from all walks of life from pursuing their dreams.

I find that insight both overwhelming and encouraging. Global participation in this important dialogue is essential, and we hold the key to our own collective success – but the reality is that two millennia of structured power play and discrimination is making these conversations rife with anxiety, ignorance and hard decisions. I, personally, can’t even begin to communicate the amount of resistance we know exists; people have dedicated their lives, careers and energy to this cause for hundreds of years without resolution.

I left the program heavy with this thought. Luckily, kismet caught up with me when I listened to a recording of the panels again the next day. The opening remarks by Anne Mosle, Vice President of the Aspen Institute, struck a chord:

“The long arc toward social justice and equality for all is not a quick fix. This is a structural issue, and this is an issue of the heart. And so as we move forward and we think about … diversity, strengths and differences, [let’s ask ourselves], ‘How are we able to honor that, respect that, invest in that – but also move forward, as well?'”

As we continue our dialogue and ask fruitful questions that unravel meaning, we’re slowly fixing what’s still broken. Does that count for anything? I think so; that’s someone each person needs to consciously decide for themselves. In light of the upcoming White House Summit on the United State of Women, I truly look forward to conversations with you, our readers, EO members, leaders and staff about how entrepreneurship opportunities for both sexes can play an innovative role in dismantling social issues like prejudice and poverty. I think we’re getting closer – now, it’s a matter of finding our second wind and continuing to fight for a larger good that recognizes what each person (male and female) can bring to our global economy.

During the month of March, EO’s social media channels will delve into the current status of the global economy. Follow #EOeconomy to hear real perspectives on business from the people who know best: entrepreneurs. Check us out on Facebook, Twitter, LinkedIn and Instagram!