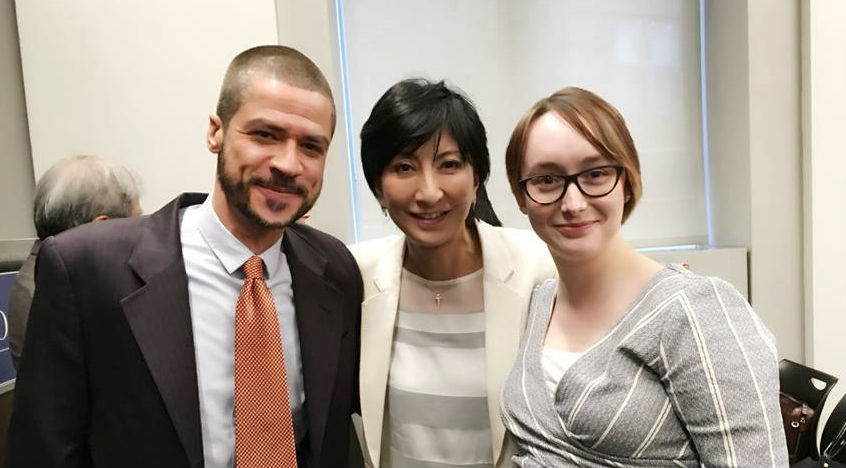 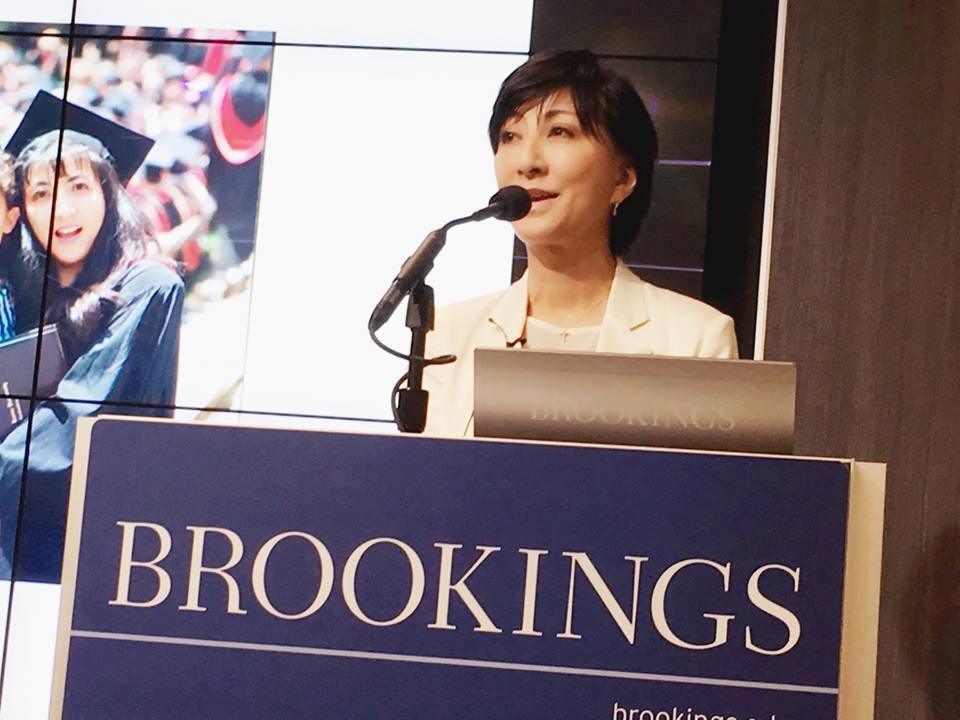 Yesterday, 8 February, my colleague and I had the pleasure of attending the Womenomics 2.0 event, hosted by the Brookings Institute to discuss the “potential of female entrepreneurs in Japan.” The morning consisted of a presentation by Mitsue Kurihara, a Board member from the Development Bank of Japan (DBJ), who launched the DBJ Women Entrepreneurs Center in November 2011; and a moderated panel with three female entrepreneurs: Donna Fujimoto Cole, Fujiyo Ishiguro and Sachiko Kuno. The event was predicated on legislation passed by Japanese Prime Minister Shinzo Abe, promoting female participation in the Japanese economy – the policy is widely referred to as “womenomics.”

The speakers (Japanese or Japanese-American) shared their personal experiences working as a female entrepreneurs with other Japanese businesses. And as a member of the audience, I was very captivated and humbled by the amount of work and progress each had made within their respective fields. Mitsue Kurihara gave an overview of the DBJ Women Entrepreneurs Center and the competition they’ve held for the past four years which invites women of all ages to present their business models for a grand prize of 5 million yen and a year of mentorship. The DBJ sees this resource as part of a driving force for refreshed, social change in Japan, in addition to aiding the expectation that women should help build the country’s GDP growth. Ms. Kurihara cited that since 1980, the business start-up rate has been consistently lower than the business closure rate in Japan; as the country continues to rebuild after the devastating disasters of 2012, the program incentivizes entrepreneurship for women as a career path with less “red tape” and larger possibilities for personal and local growth. When asked what motivated her, Ms. Kurihara simply said, “I wanted to start something for renewed growth in Japan.”

The moderated panel was equally as informative and inspiring, as the women described their own careers and answered questions from the audience. Each speaker stressed the importance of asking questions (from clients and employees) to further opportunities and garner a better perspective from which to make decisions. They also argued that business models should fluidly change, in response to the cultural climate, in order to best serve clients and support the organizations themselves.

I was particularly captivated by Fujiyo Ishiguro’s story and presentation. Ms. Ishiguro is the President and CEO of Netyear Group Corporation. Her printed biography listed numerous accolades and leadership positions, but most impressive was her personal story and journey from a young mother in Japan to a Stanford graduate and entrepreneur in the Silicon Valley – and now, as a leading businessperson in the global economy.

She began her presentation with a picture of a job board as big as a building wall, covered in postings – none of which she was allowed to apply for after graduating from university in Japan.

“When I graduated from the university in Japan, all the job postings literally stated ‘male applicants only.’ Fortunately, a few years after, the corporations started hiring women with four-year college degrees. I was hired by a company in my hometown, and it was really fortunate to find my favorite job, working with engineers. Japanese engineers are just brilliant! They create great things, and I love to work with them. I faced another challenge when I tried to find child care for my son. I couldn’t find a daycare open past 6 p.m. So, instead of pursuing dual work as a mother and a manager of a European company, I gave up Japan and moved to the United States. I started working toward an MBA at Stanford University. Going to Stanford totally changed my insight. At Stanford and in the Silicon Valley, they just love entrepreneurs! For example, when I went to the store and people asked me what I did for work, and I told them, ‘I have a very small company of my own.’ And people said, ‘Wow! This woman has a company.’ I was really happy to start up my own company – and my son was very happy. I attended my graduation ceremony with my young son. So, I began my business in the U.S. and then founded the Netyear Group in Japan. I was one of very few women to go into the IT industry.”

Fujiyo shared statistics of the number of women in the Japanese IT sector; much like the United States, this industry is male-dominated. She also provided a keen and thought-provoking perspective on the way in which men and women act on their interests and passions – and this insight has stayed with me:

“I really loved mathematics in high school, but when I chose my major, I didn’t choose mathematics or engineering because all the required courses only had male students. I was intimidated… Don’t choose something you can do instead of something you really like. I observe that most female CEOs and founders tend to choose very women-centric business industries – and that’s because it’s what they know they can do. I think the biggest hurdle we have is a woman by herself; she puts limits on herself. That’s my observation.”

How often do any of us choose something because it comes easily to us or because we know we’ll be successful? Have any of us, male or female, bypassed our true passions and interests because we’re intimidated by the amount of work or strife we will endure? The biggest message I took away from this event was the power of peer support and personal ambition, and the knowledge that none of us are truly isolated from support if we reach out for help. Vijay Tirathrai, our CEO, introduced us to an African proverb at the beginning of his term (Summer 2015) that strongly resonates here: “If you want to travel fast, travel alone. If you want to travel far, travel together.” I believe the encouragement we provide one another, especially in entrepreneurship, benefits both parties beyond understanding. And I can’t wait to see what extraordinary progress these women will make in their companies and careers by utilizing potentially their greatest resource: a global community of entrepreneurs looking to change the world.

This article was written by Karen Summerson, Writer/Editor at the Entrepreneurs’ Organization.