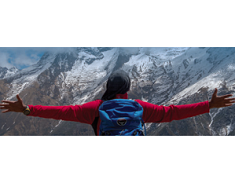 Sometimes as an entrepreneur, you learn your greatest lessons outside of business. I recently shared in an experience that reminded me just how powerful togetherness can be, especially when it comes to the EO community we know and love.

Last year, a handful of EO peers and I began planning a trek to Everest Base Camp, one of the most beautiful and challenging places to explore on earth. I was tasked with leading the first-time trekkers, a mighty responsibility that tested my leadership skills and awoke in me abilities I never knew I had. I knew going in that there were two approaches I could employ: I could respect each individual and guide him or her to take a shot at the trek independently, or I could take the group by the scruffs of their necks and build myself a team out of the motley bunch. I chose the latter.

The preparation wasn’t pretty. Three months of 5 a.m. wake-up calls, long walks with heavy backpacks, weekend stair-climbing (we were effectively climbing the Birj Khalifa every Sunday), Friday yoga sessions and my constant badgering to get the appropriate gear did not make me the most popular person in the city. The last straw was my diktat on abstention. Alcohol was allowable only once a week, smoking was severely limited and miscellaneous vices were curbed. We needed to focus. We needed to train. I was the jail warden and the nagging mother rolled into one.

In early April, we landed in Lukla at the most dangerous airport in the world. Spirits were high and our enthusiasm was unmatched. By the second day of the trek, you could hear erstwhile marathon runners pant from a distance and witness fashionistas shiver under layers of unflattering wool. The troika of the steep climb, the lack of oxygen and the bitter cold had hit home with unanticipated severity and unreal consequences. There was one case of severe trekker’s diarrhea, sporadic altitude-induced headaches and a bad fall in an icy stream; overnight, our once-high spirits plummeted. There were calls for going back from some and unexplained tears from others.

My choices were once again clear. I disallowed my personal struggles to surface and resorted to a new set of tricks to enable this splintered group to come together and complete the mission. Failure was not an option. I was no more the fastest climber but the casual companion to the weakest link of the day. When people needed medical attention, I ignored my blisters and tagged along so as to curb negative conversation on the way. Together, we pushed forward. By the ninth day, most of the team was intact. We were bruised and tired beyond imagination, but we were thriving.

The end result was that a dozen first-time trekkers reached Everest Base Camp intact and on schedule. The feeling associated with this feat is unexplainable and can hardly be expressed in an article. I cite the success of this endeavor to the indomitable spirit of each individual and the fact that, no matter what the mountain threw at us, we excelled as one unit. Failure was never an option for the crew or its accidental captain. I’ll never forget this EO adventure. It was a life-defining achievement and a reminder of just how powerful a role unity plays in life.