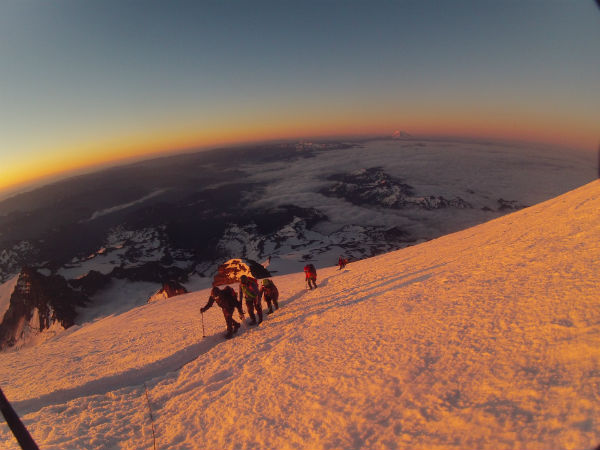 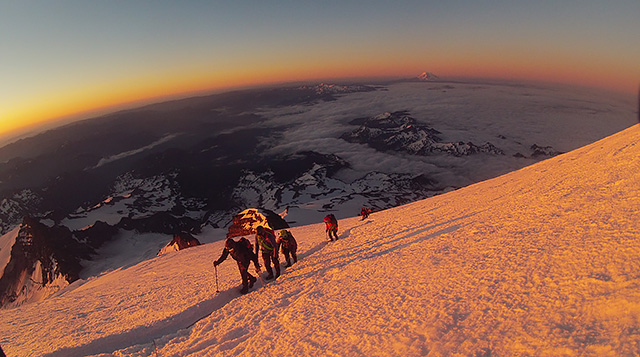 Halfway down and pressing past 10 p.m., we reached a cliff and realized that we were high above the steep couloir (ravine) we should have gone down the center of. Exhausted, we could retrace our descent back up to where we should have continued down the couloir, or attempt an 80 foot nighttime rappel down a cliff we had never encountered before. After some discussion, we decided on the rappel, tossed the rope and checked with our headlamps that the ends hit relatively flat ground below. I clipped into the rope, took a breath, and stepped off the cliff into the black.

Climbing California’s fourteeners (mountains over 14,000 ft.), I have learned many lessons that have helped as I and my business partner grow our business. While building a business doesn’t require decisions involving physical risk, it often requires assessing a situation and stepping out into the unknown to reach our objectives. Mountaineering has taught me many principles I apply in our business.

Mountaineering is the art of balancing speed versus risk. We are constantly racing against time and the elements. As the day goes on, snow conditions deteriorate. As night approaches, visibility and awareness of surroundings decrease. Unlike traditional rock climbing where you set multiple anchors and ensure redundancy where possible, mountaineering employs belays and anchors that emphasize speed and nimbleness. But this nimbleness requires a greater degree of responsibility.

In a startup business, this same principle applies. Startups and growing businesses have the advantage of speed and maneuverability. They lack the institutions, policies and procedures that reduce risk. Thus as a startup business owner, we must take advantage of our nimbleness while mitigating risks. Early on we recognized that one of the best ways to mitigate risk was by hiring right and having a positive culture emphasizing excellence and personal responsibility. We have since adopted HR policies and purchased insurances advised for our business, but we have continued to focus on a culture that attracts terrific people and that promotes responsibility.

The Right Team is Critical

Moving quickly up a mountain requires the right team. With a small mountaineering team, every member plays a critical part and has to be prepared to work in many capacities. 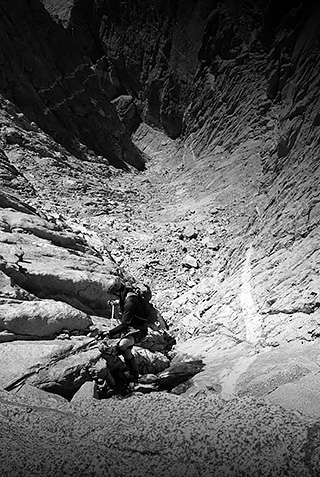 While one is belaying another team member up, another member is setting up to belay a fourth member as he leads the next section. If any member of the team isn’t ready to do their part, it not only causes delays but can put the team at risk.

When our business was small, the same principles applied. We needed people who were jack of all trades and willing to pick up slack where we needed it. A small business requires more of each team member. Early on we hired someone who didn’t quite exhibit the versatile “get-it-done” attitude. While she was otherwise a nice person, we had to make the difficult decision to let her go after 30 days. Letting someone go for mediocrity is difficult, but critical in a small company environment. We have since focused heavily on making the right hire. We’ve made some mistakes. We’ve also had to pass on decent candidates and restart a job search. But we have an excellent team now and the discipline to hire right has helped.

A few years ago after a heavy winter we decided to bag three fourteeners in the Palisade range – including the two most technical peaks. We summited Thunderbolt Mountain the first day, Starlight Peak the next, and planned to summit Mt. Sill the following day. Each “day” started at 4 a.m. and finished near sunset with us in almost complete physical exhaustion. Although Mt. Sill was a fairly simple scramble, the approach was many miles from our base camp across snowfields and two small passes. After six hours of approach and an ascent up the peak shrouded in dark clouds, we reached the summit as a summer snow storm was unleashing it’s full force. 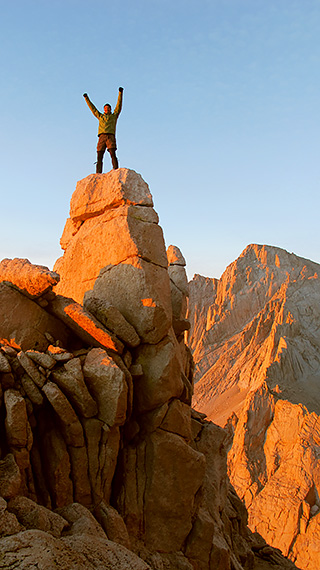 I was already pushing off signs of fatigue when near horizontal wind and snow flurries made our time at the top brief. During our descent, I was having a hard time keeping warm and about halfway back across the snowfields I had a full blown migraine and trouble walking straight. I had not consumed nearly the water and food my body needed. The group decided to stop and have me rest from the elements under a boulder while everyone wondered what would happen if things got worse. Luckily after a half hour rest and more fuel, I had recovered enough to make it back to camp.

When under extreme physical exertion, appetite and thirst often decrease although increased fuel intake is required. Consciously monitoring reserves becomes an important instinct. In a start up business, cash is the fuel reserves. Early in our business we simply focused on our growth and figured our cash flow woes would be solved through growth. Yet our business seemed to stay in a state of near exhaustion. Over time we’ve become more disciplined and learned that managing reserves (cash) is a critical skill. As our banker once told us “It’s nice that you have revenue growth and profit, but you are on a rocket trajectory and a rocket needs fuel (cash). You should know every day what your cash position is and how it changed that day.” And when it feels like everything is fine, that’s usually the time we should be doubling down on our fuel (cash).

Many think mountaineering requires excessive physical strength. While physical strength is necessary, the most important attribute is mental stamina. Success in mountaineering comes from one’s mind being in control of his body so that when fatigue sets in, he has the mental fortitude to push through it. On virtually every mountaineering trip, I have had moments when my body told me to quit – when every muscle and sinew seemed to be fatigue beyond continuance. If you’ve been involved in any sustained physical activity, you have probably encountered this feeling. The only way to achieve success through these moments is to have the mental grit and mettle to push beyond the very real physical pain. At times for me it has also required encouragement from my climbing partners.

Entrepreneurship requires this same mental resolve and determination. The substitute for physical exhaustion in mountaineering is psychological exhaustion in growing a business. There have been countless moments in our business growth when the psychological strain was almost unbearable: cash flow pressures, employee issues, competitive demands, and others. Without the mental fortitude, we would have long ago washed out and called it quits. My business partner and I often draw upon the story of Hernan Cortes arriving in the new world and promptly burning his ships. We remind ourselves that there is no “backup plan” and that we must push through the psychological fatigue. In these times it has also been incredibly valuable to have a business partner. If you don’t have one, find a business person whom you can open up with and share the burdens you’re struggling through. One of the strengths of a climbing team is that each member can help the other push past those moments of complete exhaustion.

We Are As Fast As Our Slowest Climber

On my regular team of climbers, we have one member who is the bedrock of our team – doing a lot of the planning, scheduling and organizing for our trips. But she doesn’t have the tolerance to exposure that the rest of the group has. Exposure describes how vulnerable a climber is to a large or fatal fall. It has no correlation to the difficulty of the climb, but rather the consequence of error. Often, a section can be extremely simple – equivalent to walking on a hiking trail – but adjacent to a several hundred foot drop off. Balancing speed versus risk on very simple sections with exposure, the best approach is usually moving through it carefully without roping up, setting belays, and traveling the section one at a time. To accomplish this with our teammate who had a lower tolerance to exposure, I became known as the “horse whisperer” in our group. I would help her through these simple but exposed sections by calmly coaxing and encouraging her. This helped the team move much faster – and avoid dangerous delays or nighttime descents.

In our business, we must constantly work to identify inefficiencies and be the “horse whisperer” to improve them. As our business has grown, we have recognized the need to be process engineers – to dissect each aspect of our business and determine how it can run more effectively or deliver more efficiently. Each time we have tried to delegate processes before fully understanding them, we have experienced failure or breakdown. I’m certain as our business grows, we will not need to know the intricacies of each process. But the early stages of our business have required constant active engagement in improving processes – not something that a big-picture, delegating entrepreneur wants to hear! And the reward for figuratively coaxing a climber through the simple exposed sections has been a better run, more scalable organization. 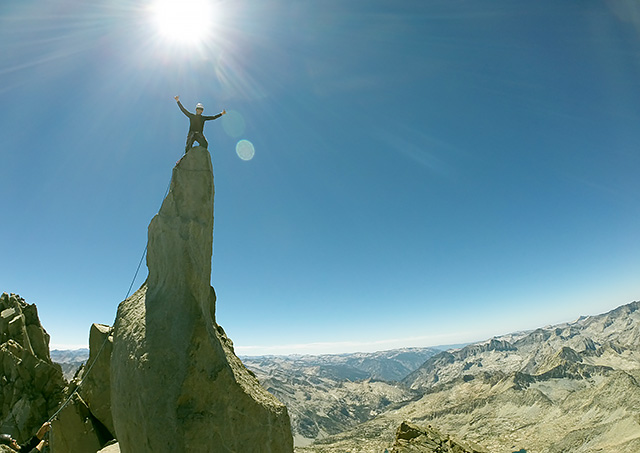 The most valuable lesson I’ve learned from mountaineering is the importance of having a hobby. As entrepreneurs it’s very easy to make our business the only thing we find rewarding in life. This is a problem on many levels. Having a hobby – particularly one that is mentally or physically demanding – helps us grow as business owners and gives needed perspective on what is important and rewarding in life. I wouldn’t trade my mountaineering experiences, particularly the challenges and setbacks, for anything.

In case you were wondering how our nighttime descent finished up, the rappel was hair raising but exhilarating. We landed safely, gathered our rope, and scrambled down the rest of the steep couloir by headlamp without incident. We stumbled into camp around 2am, fatigued to our bones but satisfied that we had safely accomplished another mountain adventure.

Ryan Swehla is Principal & Co-Founder of NAI Benchmark with his business partner and lifelong friend Joe Muratore. NAI Benchmark is a commercial real estate brokerage and property management firm based in Modesto and Stockton, CA. Ryan has climbed all fifteen of California’s fourteeners, Mt. Rainier, and many other California peaks. He, his wife and three young children, recently completed 72 miles of the John Muir Trail and plan to complete the remainder.