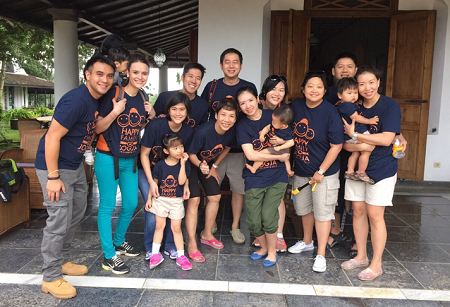 Forum retreats, in particular, enable us to channel our common passions into a unifying, shared experience.  We endeavor to chase once-in-a-lifetime experiences together, meaning participants are trying something for the first time that they may never have thought to do otherwise. Last year, for example, we went to Sri Lanka, chartered a private plane to the national park, camped in a leopard sanctuary and traveled around the coast. We even produced our own version of Pharrell Williams’ “Happy” music video during the trip, which was featured at our chapter handover event. It was the ultimate high, and I remember feeling this retreat would be tough to beat.

While brainstorming ideas for this year’s retreat, we came up with several ideas, from travelling across Indochina to hiring a boat to explore Raja Empat, Indonesia’s renowned diving spot in the east of the archipelago.  It was during these discussions that the idea of introducing a family retreat was thrown in again.  We all get along extremely well with each other’s spouses, so maybe it was time to take it to the next level. The challenge proved to be exciting – where could we go as a group of families with children ages 1-5 that would be off the beaten track, yet kid-friendly, and still capture that once-in-a-lifetime feel? After deliberating, we settled on a secluded resort nestled inside a coffee plantation close to Borobudur, Indonesia’s largest Buddhist temple and a UNESCO world heritage site. We quickly assigned specific roles to each member, with our moderator overseeing the whole process.

We meticulously picked flight times that were baby and toddler-friendly, scrutinized various restaurant options along the way and arranged customized experiences, such as meditating in Borobudur at sunrise. One of the biggest learning points we took away from this exercise was the ability to let go and completely trust the other members when it came to fulfilling the assigned roles and responsibilities. By including young children, we also had to accept that our pre-arranged schedule could be altered at any time. For example, one of our members missed his train from Surabaya and had to buy plane tickets on the departure date for his family. But luckily, we all arrived in Yogyakarta at the same time.  As such, we learned to improvise on-the-go to meet our families’ needs, while also ensuring that each and every retreat goal was achieved.

While we completed our forum exercises, our spouses and children were able to bond as they played in the pool or explored the beautiful grounds. And afterward, we would enjoy quality time as a group, particularly at meals.  We also did several forum retreat exercises that include the spouses, to get to know them better, which revealed some surprises!  The highlight of the retreat was definitely our final night, when we enjoyed one of the best barbeques we’ve ever had, perfected by the delicious meat specially flown in by one of the spouses, a restauranteur.

During our journey home, I got to thinking, wow, we all managed to pull this off! What was the success factor for this? I feel that beyond role delegation and a mutual sense of empowerment between the forum members, we were all equally excited and focused on one EO takeaway value. It’s commonly said that what you get out of your forum experience comes from what you put into it.  We applied the same mantra to the family retreat, and this I believe is the core reason why we had such a great time. We went home feeling closer than ever; even the kids had gotten along extremely well, to the extent that we joked about future matchmaking schemes. We’ve since playfully bantered with other forums that our kids have gone on a retreat before they have even become EO members.

We are hooked on this new tradition that incorporates our commitment to forum with our love of family and travel. We’re already scheming about our next family retreat in 2016 – and it’s still one year away!