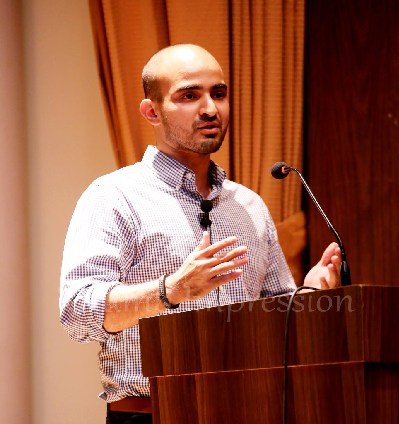 By Faizan Syed, an EO Karachi member and CEO of Health Television (HTV)

An entrepreneur’s ability to overcome obstacles is a big part of his or her success, especially when those barriers prevent positive change. Faizan Syed, an EO Karachi member and CEO of Health Television (HTV), recently made a mark by creating a weekly call-in show that covers traditionally taboo topics. In this interview, Faizan talks about the importance of empowering people, giving back to the community and the benefits of boldly going, EO style.

Commentary on sex is taboo in Pakistan, but you’re breaking new ground with a television show discussing this topic. What inspired you to create “Clinic Online”?

FS: “Pakistan is a developing nation, and a vast majority of the country’s population still doesn’t have access to quality healthcare or doctors. And then there is the issue of fake doctors who dupe local residents on a daily basis. I wanted to use the national footprint of our TV channel to give citizens across the country access to the best healthcare professionals so that their basic questions could be answered. These professionals volunteer an hour of their time and take ‘live’ calls to answer any questions a viewer may have. I’ve always viewed this as a corporate social responsibility initiative, and never thought that it would garner such attention.”

Your show is giving people a rare chance to speak up about their health concerns. Why do you think it’s hard for people in your region to open up about sex?

FS: “The combination of Islam’s religious values and the sub-continental culture prevents people from openly discussing this topic. Education on this is limited, and is not passed on from parents to children; nor is it taught adequately in schools through sex-education classes, like in the West. This blend of social taboos and limited education creates social issues that aren’t being dealt with. By offering viewers a chance to anonymously call in to discuss their concerns, we’re educating them on a topic they don’t feel comfortable openly discussing with anyone other than a doctor.”

What one example exemplifies how “Clinic Online” is empowering the people of Pakistan?

FS: “A few months ago, a woman living in a rural area called and asked the doctor for help because she and her husband had been unsuccessful in conceiving. Her husband kept saying it was her fault and that there was something wrong with her. The doctor advised her to visit her local specialist, gave her a list of tests to be conducted on both her and her spouse, and asked her to call back with the results. A few weeks later, the woman called us and told the doctor that the issue lay with her husband and not with her. She was extremely grateful that not only did we help identify the issue (that her husband then started seeking treatment for), but we were also able to help her feel empowered in her own home.”

Since its launch, what has “Clinic Online” taught you about the people of Pakistan or the power of entrepreneurship?

FS: “Because of the overwhelming demand from viewers to cover the topic of sex, we decided to dedicate a day to covering sexual-health issues, expecting the majority of the callers to be older men or women. What we found is that the average caller was a woman in her thirties, calling about concerns she has about her spouse or her children. We didn’t expect young women in Pakistan to feel so empowered, be so forthcoming in sharing their issues and have a genuine interest in seeking support. In this case, the power of entrepreneurship led to the empowerment of individuals in our circle of influence.”

You embody the EO core value of “Boldly Go!” in that you’re using entrepreneurship as a vehicle to make a mark. How has EO helped you along your journey?

FS: “EO gave me instant access to entrepreneurs who have taken big risks to achieve success. Through experience-sharing in our Forum, engaging international speakers and networking with other global EO members, I have observed two common traits among entrepreneurs: They are very clear on where they want to be, and they’re focused on how they plan to get there. For that reason, at HTV we laid out a clear vision and values statement, which makes it easier for each employee to focus on what is most important. This allows us to take risks and ‘boldly go’ because each team member is clear on where we want to end up and how we want to get there.”

To learn more about Faizan’s journey, contact him at [email protected].