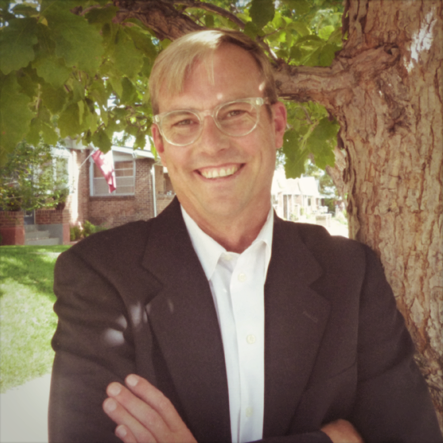 by Russell Lundstrom, an EO Colorado member and founder of Simple Smart Science

“Succeeding in business is all about making connections… For an entrepreneur, the ability to forge connections is a great asset.” Richard Branson

Within the Entrepreneurs’ Organization exists one of the strongest, most influential networks in the world today. As a member, you can meet just about anyone on the planet through EO. One of the great benefits of membership is the opportunity to meet with many diverse and successful people.

The challenge is getting to know someone deeply in a relatively short period of time. Luckily, we have the lifeline tool, which I would assume the majority of EO has completed at some point.

This tool allows you to see where a person has been, but more importantly, what those events mean in their lives. Most of us have stories with several high and low points.

My timeline from early on… 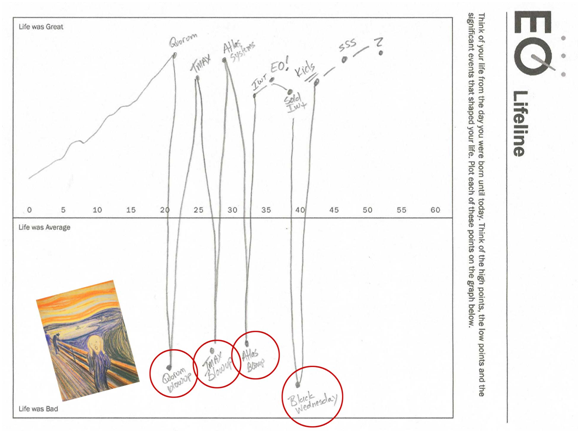 Our sense of self is typically defined by this lifeline and the meaning we give it. The challenge I faced in starting my newest business was my personal “story.” The low points tend to act much like anchors.

But then it all changed.

Is the Cup Half Empty or Half Full?

One of the most influential coaches in my life once opened a can of soda, drank half of it, placed it in front of me and asked, “Is the can half empty or half full?”

We’ve all heard this before and the optimist in me gleefully declared that it was half full.

And yet, I was stuck from moving forward in my new business by these low points on my timeline. Much like many entrepreneurs I meet, most of whom are very positive and half full kind of people, they are still held back by the low point stories in their lives. I know people today who are stuck because of an event that happened in the past.

What my coach taught me was that yes, the can was half full, but it was also half empty at the same time. It’s always both.

You have to realize that for every half empty story in your life is an equally half full story.

You can re-define your stories so that those low points can transform to be your very high points.

You can move your baseline. 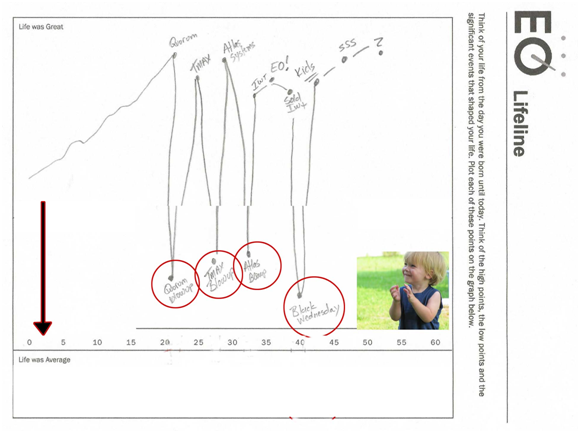 This is much deeper than positive thinking, because it affects your belief systems and your beliefs control everything in your life.

If you take the time to really think about those low points, those tragedies holding you back, you can find the half full version of the story. You can begin to move your baseline and effectively re-write your life.

In my first business I had gone to Europe to start an electronic distribution company. With over half a million in sales in the first 120 days we were on top of the world. 30 days later I found out that I had been “accidentally” removed from all agreements and basically left with nothing.

For many years this “failure” defined my life. Not only in my own eyes, but in the eyes of my friends and family.

Then I realized the half full part of the story; a young, naive 20 something with no money, contacts or resources, who left for Europe on a whim. Within six months he was able to secure distribution and train a sales force of hundreds who eventually produced more than US$6 million in revenue in the following 12 months.

Now that is not a low point by any means. As a matter of fact, I’m quite proud of the story now.

The success story is equally as valid as the failure story that had been holding me back. I just choose to focus on this half full story rather than the half empty one.

I have realized the same for all my “low point” stories. Now my baseline looks like the one above.

I’ll emphasize this again; it isn’t just fluff and positive thinking. It’s a powerful way to redefine your life and your beliefs that may be holding you back from achieving the greatness you were put here to do.

You can move your baseline and make all your failures your proudest moments.

You Won’t Believe Where My Next Life Point Is

This little concept needs to live with you every day. You will constantly be writing your story and creating new points on your timeline. The question is: where do you put them?

Case in point. On August 20, 2014 I suffered a severe heart attack and I’m currently recovering and searching for the story I’m going to put on my lifeline.

How am I going to make this low point into one of the best things that ever happened to me?

2 Responses to “ Moving Your Baseline ”