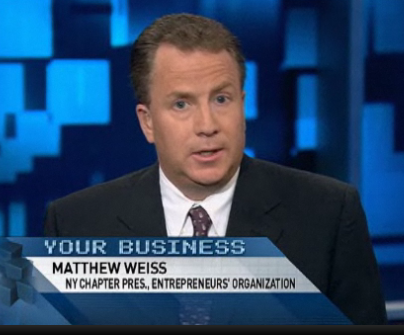 by Matthew Weiss, an EO New York member and president of Weiss and Associates, PC

Having been an EO member since 1996, I’ve participated in hundreds of learning events, Universities, Forum meetings and other business learning opportunities. Through the years, the accumulation of this learning has helped me minimize the need for my involvement in the day-to-day operations of my business. Owning a personal service business made this E-Myth transition particularly challenging but, piece-by-piece, I have been able to divest myself of many of my roles in the company.

If I had not “Gerberized”, I would not have been in a position to take on one of the most rewarding and energizing projects of my life. It started as a steak lunch with my banker, Jeff Crowther. Jeff told me the story of his son Welles, a 9/11 victim. Welles’ story of courage, strength and sacrifice only became known eight months later as a result of a single, ordinary object … a red bandana.

By the time that Jeff had finished, I thought three things in quick succession. What an amazing story. Everyone should hear this story. And, I want to tell everyone this story.

While my passion for sharing Welles’ story gave me the impetus, I got the confidence to write and direct my first documentary film from my entrepreneurial training. Having successfully quarterbacked numerous projects in my business, I knew that I could do Welles’ story justice. As I get closer to the end of this thrilling 4-year project, there are multiple EO lessons that have helped me create “Man In Red Bandana”.

Communication starter sets the tone of the film:

In telling Welles’ story, viewers will learn what it was like to lose a loved one on 9/11. I drew on my Forum experience of using communication starters to kick-off presentations. The opening discusses the various societal changes that 9/11 brought about (ex., increased security, erosion of privacy, etc.), which affect us all. With this backdrop, viewers will better appreciate the profound change of dealing with premature loss.

Through the years, I have cultivated some great friendships and relationships throughout the EO community. Having heard Keith Ferrazzi, the master networker at a few EO events, I know the importance of building relationships. When I meet someone, my first reaction is to try help or connect him or her in some way.

I helped one former EOer named Kevin McKiernan many times and never asked anything in return. However, a few months ago, it dawned on me that Kevin might be able to help with my film. Due to my past willingness to give, he jumped at my request and pursued it as if it was for his own movie. A few months later, I received an original recording by Lyle Lovett that we’ll be using in the film.

I learned in EO a long time ago to discuss what I am doing with whoever will listen. I share my challenges and ideas on a regular basis. This served me well in November 2011 when I told fellow EOer Henry Kasindorf about my film at EO’s Thanksgiving Day Parade event. In response, Henry said that he was a medic on 9/11 and worked the “pile” during the aftermath of this tragedy. Henry continued that he took an hour-long home video of the scene and asked whether I would like to see. Of course, I jumped at this opportunity and, as a result, we now have some spectacular footage for our film that has never been publicly seen.

My EO marketing training has also taught me to build communities, even before you need them. As a result, I regularly updated my film’s Facebook page and have already been rewarded with over 10,000 “likes”. I have also created commemorative red bandanas as talking points for my fans. This community will be invaluable for us when the film is released next year.

When I am eulogized at my funeral, I know my role in making this film will be part of it. Regardless of how the film is received, I feel grateful that my business is in such a position that I have the time to take on this project. I also feel blessed that my family, my network and EO have helped me produce this special film.