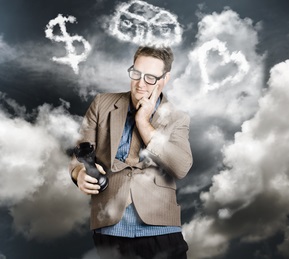 By Alan C. Fox, an Overdrive contributor, and author of PEOPLE TOOLS FOR BUSINESS: 50 Strategies for Building Success, Creating Wealth, and Finding Happiness

In his famous poem, “The Road Not Taken,” Robert Frost declared that he preferred to take “the road less traveled by.” I take that idea not only as a useful philosophy for life, but also as a better guide for business.

When I began to buy and sell commercial real estate in 1968, I was told that the market had been weak for years, and that I was foolish to even consider that kind of investment.

Luckily, my father raised me to be a contrarian. I smiled and began to invest. The market soon improved dramatically. Since that time, I’ve continued to follow my father’s advice and my business has grown into a billion dollar company.

“If everyone is buying, then sell,” my father advised. “If everyone is selling, then it’s time to buy.” He once called his stockbroker, Carr Neel Miller, and asked for his company’s research on the First Charter Financial Corporation. Mr. Miller said, “Fred, the Savings and Loan industry is so shaky that E. F. Hutton & Co. doesn’t even follow it. We have no research.”

It pays to be a contrarian. Of course, being a contrarian doesn’t mean you always go against the grain. You have to be selective. But being a contrarian means that you are always willing to QUESTION your direction, especially when everyone else seems to be floating with the current.

Take for example the financial crisis of 2008. During that period, most people were transfixed by the seemingly unlimited growth potential in the derivatives market. Financial analysts, including some of my own, were encouraging more and more investment.

But my father taught me well, and I decided to take the road less traveled. Where others saw an economic boom, I saw only the exponential risk of some US$500 trillion in promises that banks and insurers didn’t have the reserves to keep. I sold my stakes in the securities market in the spring of 2008, and breathed a huge sigh of relief that fall when I avoided, unlike most, losing my shirt.

A number of my employees approached me after the bust. “Our 401K has lost 40 per cent of its value. We’re going to sell.”

“It’s a great time to buy,” I said. I hope they did. They would have earned a profit of 66 per cent on their investment when the market regained its original value about four years later.

History shows time again that after a boom or bust, the majority is almost always wrong. And while it can be scary to swim against the current, those who do generally benefit greatly. The best stock investor of our time, Warren Buffet, has been reported to say, “When others get greedy, I get scared. When others get scared, I get greedy.”

In business, and life itself, the future is unpredictable. Whether it’s Lehmann Brothers filing for bankruptcy, the introduction of a new technology, or a change of government regimes in sixteen different countries, change is inevitable. And it is the contrarians among us that will benefit, rather than be harmed by that change.

So I say be prepared. Look around and figure out in which direction the tide is flowing. Then dare to be a contrarian–in business and, perhaps, in life. Try taking, as Robert Frost suggests, “the road less traveled.” It could, indeed, make all the difference.

Alan Fox is the president of ACF Property Management, Inc, and author of The New York Times bestseller PEOPLE TOOLS: 54 Strategies for Building Relationships, Creating Joy, and Embracing Prosperity. He has university degrees in accounting, law, education, and professional writing. He was employed as a Tax Supervisor for a national CPA firm, established his own law firm, then founded a commercial real estate company in 1968 that now owns over one billion dollars in real estate. Fox is the founder, editor, and publisher of Rattle, one of the most respected literary magazines in the United States, and he sits on the board of directors of several non-profit foundations. To learn more about Alan, you can visit www.peopletoolsbook.com