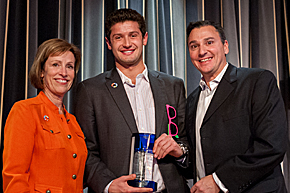 In 2013, more than 1,500 students from 27 countries participated in the EO Global Student Entrepreneur Awards (GSEA), a premiere program for recognizing student entrepreneurship around the world. Driven by the Entrepreneurs’ Organization (EO), this annual program affords students a chance to showcase the innovation, profitability and social responsibility of their qualifying businesses, as they compete against other student entrepreneurs and vie for the prestigious title of “Global Student Entrepreneur of the Year.” Countless GSEA participants go on to make an even bigger mark in their communities, regions, industries and the world.

Recently, Daniel Fine, a 2013 EO GSEA Global Finals runner-up and founder and CEO of Glass-U, a customizable and foldable sunglass business, struck a licensing deal with FIFA for the 2014 World Cup in Brazil. As Fine recently stated in The Daily Pennsylvanian, “[This partnership] is a big stepping stone for us. FIFA is the largest sporting group in the world.” Glass-U designed and manufactured sunglasses for all 32 teams participating in the tournament, and previously had their products customized for SXSW and Lollapalooza.

Another EO Global Finals finalist was 3D Robotics’ co-founder Jordi Muñoz, who built the largest drone manufacturer in America and was recently named to Inc.’s “35 under 35” list. Jordi went from building drone equipment out of his garage in 2007 to partnering with former editor-in-chief Chris Anderson of Wired magazine.

When most people see obstacles, entrepreneurs see opportunity. These student entrepreneurs leveraged what they learned through GSEA to make a mark not only in business, but on the world. Discover more about EO GSEA and the role EO plays in supporting tomorrow’s business leaders, today.