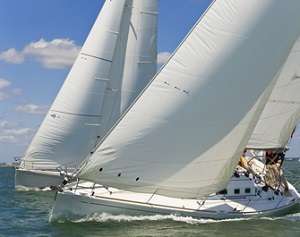 I’ve made my way to the Sydney Harbour docks before, but never have they been so alive than on the day of the Rolex Sydney Hobart Yacht Race 2013. Before me stood 628 nautical miles of danger and 94 fleets comprised of seven former race winners, all of whom were vying for line honors. My heart was beating out of my chest, my brain was buzzing. My training was complete. Race day had finally arrived.

I was part of a relatively new crew on an even newer, unproven boat, and I could tell that we were in a classic “dark horse” situation. Despite the possibility of failing horribly and going belly up in the middle of Australia’s most commanding body of water, my team had the potential to make the sailing community stand up and take notice. Still, it was risky. Like in business, successfully finishing the race would come down to communication, tactics and following the game plan. The race began with a BOOM as the starters’ canon echoed across the harbor and our yacht—Kerumba—streaked to the front of our class. My instincts kicked in: weight out, hang off the rail, squeeze the angles, and minimize our heel. The first day delivered picture-perfect conditions, filling the carbon-racing main sail to the max. We fueled our bodies, discussed tactics and prepared for the onslaught ahead.

Day two saw us positioned first in class as we continued south, and our navigator worked furiously to make the most of the ailing breeze. Sails up, sails down, tack jib, team discussion, make a call … the team was a well-oiled machine working as one. But new challenges lay ahead. Next stop: the Bass Strait. Day three was incredibly dangerous, but we executed our game plan thanks to our planning and vision. As conditions worsened, we made a declaration prior to entering the Bass Strait that we should forge ahead. We understood the risks, but there was no turning back. As the bowman—the guy manning the front of the yacht—I’m usually foremost to the bow and directly exposed to the weather. It was exceptionally cold and terrifyingly windy on day three, and at one point I feared that I would get swallowed up by the dark waters of the angry ocean and never be seen again. Dig deep and harden up— just like you do in business, I thought. I had to keep going.

By day four, the end was near. Yet we were presented with more drama as four yachts from our fleet were forced to retire. Fatigue was also taking its toll. I would come off of shifts and drop on the nearest spare bit of floor, falling almost immediately to sleep. I was feeling the brunt of the southwesterly wind and massive seas, and it shook me to the core. Thankfully, our destination was in sight. Powering up Hobart’s majestic Derwent River, Kerumba completed the race 19th on line honors and 6th overall on corrected time. What an achievement! Through teamwork, passion, a focused vision and goals executed to near perfection, we had conquered the iconic race.

So what did this once-in-a-lifetime experience teach me? That the fundamentals of good business closely align with navigating one of the world’s most challenging yacht races. In order to succeed, we needed clear, articulated goals. And while we were driven to win, without a strategic vision and focus, we would have never reached the finish line. Also, solid communication meant that we were able to monitor and evaluate our progress; updates on challenges meant difficult situations could be managed effectively. Finally, teamwork prevailed. Like running a business, the Rolex Sydney Hobart Yacht Race is not a one-man job. We all had our part to play, and different experiences meant we could leverage our combined skill sets during times of choppy or calm waters.

Rohan Wood is a multi-franchise FSR owner and commercial real estate developer. Fun fact: Rohan left home when he was 15, lived in a caravan and worked his way through school by signing his own report cards and late slips. Contact Rohan at [email protected]