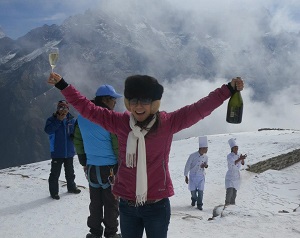 By Katrina Bantug, an EO Philippines member and president of 3DVIZION

One of the first things you learn about the EO experience is the power and importance of global engagement; specifically, peer-to-peer networking and the value it provides your entrepreneurial journey. I’ve been a member of EO Philippines since 2009, and I didn’t understand how much engaging beyond my chapter could benefit my business until I signed up for the Everest Summit 2013, a regional event hosted by EO Nepal, a chapter small in size but large in heart.

I went to Nepal for a very specific reason: I believed that the trip would ignite something in me that would help me take my business to the next level. By saying “yes” to this EO opportunity, I was treated to an experience that expanded my global mindset and afforded me a lifetime of memories. From a champagne breakfast at the base of Mount Everest to creating lifelong friendships while exploring historic temples, it was truly a once-in-a-lifetime event. And while exploring the culturally rich setting was priceless, my biggest take-away was a clearer image of who I was as a leader.

In my business, I tend to see things only from the top, always looking down at the workers and imagining the “big picture.” While this can be productive, I would often spend so much time at the top that the big picture was the only thing I could see.  When numbers dipped, I made a knee-jerk grab for the reins. I was afraid of losing control, so I shot down every idea that wasn’t my own. It reached a point where office meetings became a one- woman show. My fear of losing control was weakening the morale of my company, and I quickly became detached from what was happening down below. I needed to rediscover my leadership values and plot a new course— fast.

An experience during the Everest Summit 2013 helped me do that. Toward the end of the event, I visited an ancient temple in Kathmandu, where I saw a group of Buddhist monks praying. Their voices were somber and deep, and I was entranced at the display of power in the small community. These were people dedicated to living life as simply as they could. They owned nothing, shared everything and performed their duties just for the sheer act of doing. The entire community functioned without someone coercing its people to work. It simply … was.

In that moment, my views on leadership shifted. I finally understood that my role as the boss is not to use my position to lead people, but to empower them and create an environment where staff are free to function according to their responsibilities. Coming down from my ivory tower wasn’t a completely smooth transition. For starters, I had to retrain myself to stop old habits— go from making demands to making things possible. I also had to accept that things like low sales figures are sometimes beyond my control, and that the best response to a crisis is to inspire others to do better. Finally, I discovered that when my employees believe that I have their best interests at heart, they’ll go the extra mile for the company. I’ve now committed myself to focus less on maintaining a stronghold and more on helping my staff reach their full potential. They can sense this, and it inspires them to work harder.

It’s a well-worn cliché, but only because it is an unavoidable truth: The best things in life really are free. Attending EO Nepal’s regional event cost money, sure, but I found a new business direction and made some hugely impactful friends along the way. What’s more, I learned an invaluable lesson about leadership. To become a better leader, I needed to first learn how to serve others. Pushing my staff to do their best won’t happen with fatter paychecks, but with more inspired leadership. If you ask me, that’s the most priceless lesson of all.

Katrina Bantug is the CEO of 3DVIZION, a firm specializing in glasses–free 3D and 2D digital outdoor media. Fun fact: Katrina is the great-great-grand- niece of Jose Rizal, a national hero of the Philippines. Contact Katrina at [email protected].

One Response to “ The Long Way Down ”