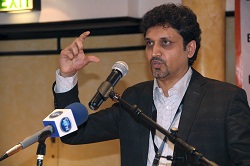 Every year, the Entrepreneurs’ Organization (EO) launches new chapters in thriving regions around the world. With the support of our members and member leaders, we’re expanding our reach and further positioning ourselves as global thought leaders on entrepreneurship. In this special interview, EO East Africa’s chapter launch champion and Chapter President, Sriram Bharatam, discusses what it takes to launch a new chapter and how EO East Africa is making a mark in and beyond their region.

What inspired you to become a chapter launch champion, and what were you hoping to accomplish with the development of a new chapter?

SB: I’ve been an EO member for 10 years now. As I was starting two new businesses in Kenya, I realized that there was a need to have a community of entrepreneurs who could trust each other and serve as a sounding board for learning and growth. I was surprised to learn that there was no EO chapter in the region, so I took it upon myself to champion the launch of EO East Africa. My goal was to create a group of likeminded entrepreneurs who would share common core values and work together toward nurturing and growing their career paths. Along the way, I had an opportunity to meet and learn from some of the local entrepreneurs, all of whom are contributing in their own ways toward the growth of their economies. It’s been an incredible journey so far!

How would you describe the chapter launch process?

SB: The chapter launch process is one of the high points in my life. As a stranger in a new region, I often felt unsure of my next steps. But I kept EO’s core values in mind as I worked and met prospective members. I trusted the process EO created and went about learning, meeting and on-boarding new members who shared common values. EO Global’s website had all of the tools and processes clearly laid out, which helped accentuate the process. By championing a new chapter, I was able to give back to an organization that has given me so much over the years and contribute to its global footprint.

As a new EO chapter, what kind of impact do you want EO east Africa to make in EO and beyond?

SB: We wish to create a positive learning environment and help local and regional entrepreneurs leverage the EO network. We are also pursuing opportunities in the form of local and regional learning events, which will serve as an opportunity to create once- in-a-lifetime experiences for our new and prospective members. As Chapter President, I want to set the right structure and culture, and nurture leaders who can sustain and grow our influence beyond East Africa. And as a task force member of EO’s Africa 750 initiative, I’m helping EO achieve 750 members by 2018 and roll out Africa as an independent region. As a chapter, we’re confident that we will play a major role in achieving these targets!

SB: Kenya is uniquely positioned in Africa because of its language strength, entrepreneurial climate and the hard-working nature of its people. What’s more, the innovations and penetration of mobile money transfer in the region has played a big role. For example, the volume of money transfer done by Western Union globally is less than what M-Pesa (a mobile money service by Vo- dafone) is doing in Kenya, where the population is only 42 million. Africa as a continent has a growing middle-class population, with a youth population of more than 70%.

Coupled with the growing service industry, rich mineral wealth and growing GDP, Africa is fast becoming a leading entrepreneurial hub. How would you describe your new chapter and fellow chapter mates?

SB: Our chapter has a unique mix of 23 members from eight different nationalities who are managing more than 40 businesses among themselves and employing more than 14,000 people. Together, we contribute US$1.2 billion to the African economy, and are working on positioning Nairobi as a driving force of Africa’s emerging entrepreneurial landscape.

What advice do you have for other members interested in launching a new EO chapter?

SB: If you get an opportunity to champion a chapter or be a part of the group that launches one, grab it. It’s a unique opportunity to be a part of something bigger than your entrepreneurial journey, and you’ll help pave the way for a new community of leaders who, like you, are eager to make a difference.

One Response to “ Expanding EO’s Reach in Africa ”