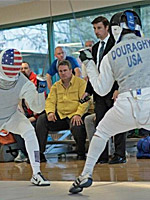 By Jamie Douraghy, an EO Los Angeles member and founder of Artisan Creative

When I was 17, I joined the fencing club at my English boarding school, and was introduced to what would become a never-ending source of motivation, pressure, excitement and strategic mental training. Thirty-seven years later, I’m still physically and mentally sharp thanks to the life lessons I’ve learned from this rewarding sport. For me, fencing is more than a hobby; it’s a passion that has taught me as much about the tenets of being a successful entrepreneur as any classroom or boardroom experience. Here are a few things I’ve learned from fencing that translate to entrepreneurship:

Negotiation is in the Non-Verbal Details
Fencing, like negotiating, is a game of cat and mouse. Both contestants are sizing each other up, interpreting every movement and waiting for the most opportune time to launch their offense. In fencing, the goal is to defend against your opponent’s attacks, while setting up your own moves to counter using his miscalculated decisions as a chance to strike. Foil fencing is about establishing “right of way” and convincing the referee that you had the final action and scored the touch. Negotiation follows the same logic, in that it’s up to you to convince your client that you’re better than the competition. This requires a lot of back and forth (we call it “footwork” in fencing) and relentless determination to get to that final spot at the top of the podium. This technique helped me tremendously as I learned about the importance of a successful negotiation in business. Instead of holding back and waiting, I choose to go on offense and score a few points early on as part of my plan to win. Fencing taught me how to anticipate my client’s needs, read their non- verbal cues and arrive at a mutually beneficial arrangement.

Development Starts with Discipline
Fencing has also taught me the importance of discipline. If I wanted to continuously improve as an athlete, I had to prepare, train and enter each match with the confidence that I would win. If not, I was defeated before I even put on my gear. The same applies to business. We can all perform at a higher level, no matter the venue; discipline in practice and a perseverance of goals are characteristics everyone needs to excel. When I decided to start my business, I had to set the goal, make the necessary plans to accomplish the goal and then practice my sales pitch, elevator pitch, PowerPoint pitch, handshake, eye contact and smile. Then I would walk into every meeting with confidence, as I could no longer hide behind my fencing mask. I knew that if I hadn’t practiced hard enough in business, deep down I wouldn’t believe in my abilities, and I wasn’t going to convince anyone else of my vision.

Learn to Lose with Grace
One of the most important lessons fencing taught me is the importance of never dwelling on a loss. As an entrepreneur, I have been dealt major upsets, and my history of fencing has taught me how to handle setbacks with as much grace as I would a victory. I’m confident in my movements, abilities and desire to win, though winning it all doesn’t always happen. Sometimes I meet a competitor who simply bests me. One example was at the Veteran World Championships in Bulgaria this year. Earlier in the day, I had eliminated a higher seed. I was motivated and mentally ready for the next opponent. Though I gave him everything I had, he eliminated me. After a year of training and traveling, it was all over in less than 10 minutes. Instead of getting angry, I accepted the loss, moved on, and during the long flight home, started planning how to qualify for the 2014 team.

I’ve been a competitive fencer for more than three decades, and I also coach fencing to youth, teenage and veteran fencers. Fencing is an extremely challenging sport, and I owe a lot of my accomplishments to pursuing an interest that stimulates both my body and my mind. Can I say that all of my professional success is due solely to the lessons I learned while fencing? Of course not, but the sport did equip me with the skills I needed to achieve success in all avenues of my life. That’s one of the greatest lessons of all, learning without realizing I was ever being taught.

You can read the original post, and more inspirational member stories, on Octane